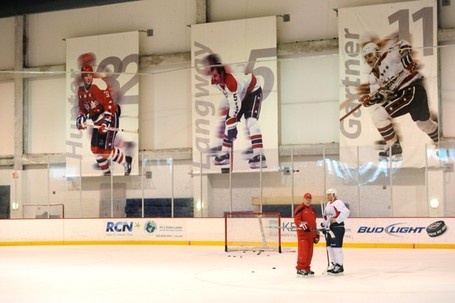 It's been an emotional day. A good man lost his job. A legend took his place. We'll be discussing the implications of the Caps' coaching change for days to come. And until we truly get a sense for the playing style of a Dale-Hunter-coached NHL team (something Hunter himself may not have really defined yet), it'll be impossible to know what this change means for the organization.

But some of the coming changes are predictable. Here's one fan's take on the folks who stand to gain or lose from this change.

Winner - Mike Knuble. A Dale Hunter type player if there ever was one. Knuble has made the most out of his talent by sheer will. He can be depended on in any situation and has a knack for finding success in high traffic areas. I don't think Knuble will be on the fourth line too many more shifts this year.

Losers - Mathieu Perreault and Cody Eakin. Hunter has a reputation for giving his star players big minutes. That policy may not transfer entirely to the NHL -- it may have been a reflection of the realities of coaching in the OHL, where the talent difference between the best and worst players on one team can be much greater than in the NHL. But we can still expect that a Hunter-coached team will depend on its stars, and it will depend on role players who are counted on for a specific roles. Perreault and Eakin aren't stars, don't kill penalties, aren't power play specialists, and can't win faceoffs. Expect their ice time to drop.

Winner - Roman Hamrlik. I refuse to believe that this twenty-year veteran forgot how to play hockey over the last offseason. He just has to do better in a new system. Right?

Losers - Bob Woods and Mark French. These two disciples of the Boudreau school of coaching were each being groomed for a future NHL head coaching job. With the hiring of a new head coach comes a new philosophy. And if Hunter has success, he may have the opportunity to bring in his own assistants.

Winners - Brooks Laich and Mike Green. It's too easy to stop at the fact that these guys owe a huge amount to Boudreau. That's true, but it's also true that of the "core" players, these two have adjusted their game better than anyone else. Backstrom's game doesn't need changing. Laich's didn't either, really, but he got much better defensively anyway and is now much more valuable than he was a couple of years ago. Green's game absolutely did need changing, and he has become a very solid defensive player. Green and Laich can be depended on in any situation. And hopefully Hunter will find a way to reduce the physical punishment that Green absorbs every game.

Loser - The Press. Bruce Boudreau is a fantastic quote. Hunter is going to be quieter, more businesslike. It's going to be harder to write those stories. I think some of the over-the-top reaction to Boudreau's firing is just the fact that the hockey press has always rallied around the guys who make their lives easier.

Winner - Alex Ovechkin. I predict we're going to see a renewed Ovechkin. A man who has many burdens taken off of him. A man who is asked to do little more than play the game and have fun. He's a left wing, for crying out loud. He doesn't need to be his line's defensive conscience -- leave that to Backstrom. All he needs to be is Ovechkin. I predict Hunter is going to simplify things for Ovechkin, and let him cut loose and be himself.

In the end, the real winners and losers will be determined by the players themselves. They cost their coach his job. Now it is up to them how they respond to a new voice. And as with everything else for this deeply talented but (thus far) deeply flawed team, the real test is months away.