I generally learn a ton about the Caps from reading the comments in the clips-there's no better way to take the temperature of the fan base than doing so. But today, there was unquestionably a fairly significant difference between the way people who went to KCI for practice reacted to Boudreau's firing and the way they did so on the Rink.

That's definitely to be expected on some level. People act differently online than they do in life; there's also the added element of having people you root for around you that changes the way you would view any situation emotionally. With Al Koken and Joe B. just casually hanging around the practice facility, people were bound to get a little more excited than usual. But the difference was starker than I had expected it would be.

I rarely go to practice. This is the second one I've ever been to, so I don't have much of a frame of reference. But I can say that there was a sense of cautious optimism there, even if the scene felt kind of like a house filled with hungover people at times. I don't think anyone had really absorbed the news yet.

One mustachioed Movemberite said he had gotten permission from his wife to leave the nearby hospital where a family sister was in labor just so he could get a glimpse of what was going on. "Dale Hunter's been my hero since I was, like, seven years old," he said. I'm not sure if he got to see Dale-practice didn't actually start until noon-but he felt he needed to be there, just the same.

Most people, though, didn't really seem like they were focusing on the potential shortcomings of Hunter himself. I don't think any of us feel unfettered happiness at this. "It was too out of hand," people said about the way the Caps had played against Buffalo on Saturday. Another: "I feel bad for Bruce. I feel like his team let him down. They should be ashamed of themselves."

And there was plenty of nostalgia. "I just want to see Dale!" one old-timer practically yelled. I was standing near the media scrum at KCI, which was definitely 40 people or so deep (it blocked our view of George McPhee, so we resorted to following a press conference that was 10 feet away from us on Twitter. We actually all ended up being very pleased with that arrangement.). Others just talked about growing up watching him play, and a Hunter jersey made an appearance as well. 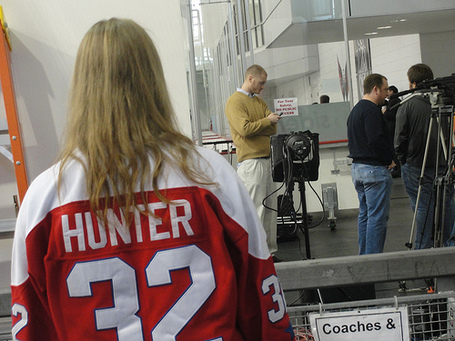 The new coach exuded a certain power on the ice, too, acting more like a junior rabbi greeting people after services than anything else. Hunter let assistants Dean Evason and Bob Woods pretty much run practice; aside from chatting with players, he didn't do too much to get in the way. And when he took a penalty shot on Tomas Vokoun (he missed), he got plenty of cheers.

I really didn't hear one remotely skeptical word about Hunter for the entire three hours I was there. Granted, I didn't expect to hear anything from any member of the CSN crew (Joe B., Locker and Al Koken were just casually hanging around practice for quite some time, doing just a bit of minor complaining about all the TV and radio hits they would have to do today, including one planned for Locker on TSN and one that Joe B. had done with Edmonton media).

I left feeling pretty good about things. When I got back and looked at the Rink, though, I felt like I had drunk just a bit of Kool-Aid. Maybe I was just brainwashed by being at practice, where things seemed happy (and where Alex Ovechkin, who was the first guy on the ice, took a hard shot at the net that talking heads would have called a positive show of emotion; a sign that he's ready to perform for a new coach. Who really knows right now.). But there was some important healthy skepticism there-mixed with the "We'll miss you as a person, Bruce" sentiment that was present at KCI.

STLSpidey summed it up best: "The ‘Hmmm. Hunter. Hmmm.' sentiment is prevalent." That was definitely true. It seemed like most people thought the move tilted a little to far into the emotional realm to make sense, and was a way to placate the fans-the same followers who seemed that magic seemed to have worked on at Hunter's first practice.

I think it's right to be optimistic and excited about a new coach, especially one like Hunter. But I welcomed the uncertainty, even if it shook me up a little bit. It brought me back to earth, as Rink comments generally tend to do.

So I don't know where the correct answer lies-should we just let things play out, or should we wholeheartedly be wary of hiring an unproven coach (at least at this level)? The answer, as always, lies somewhere in the middle-and I'm sure we'll have a better sense of things in two weeks time or so.

All I know, though, is that KCI had some kind of weird mystique on Monday, where everything was all right and where everyone was ready for the savior to come in and turn everything around.  Optimism reigned supreme, and it allowed us to even be able taunt another team's players just two days after an atrocious 5-1 loss. When I was at practice, another person said he had seen a few of the St. Louis Blues players nearby earlier in the day. They were laughing about the firing, he said, and he shot back: "You know what that means-it means you're probably going to get your butt kicked tomorrow."

We should be so lucky. 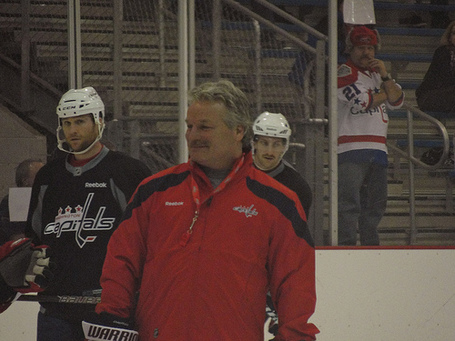