Elliote Friedman's most recent "30 Thoughts" column described the changes that Bruce Boudreau has made to the Washington Capitals' system to shore it up defensively, including implementing a neutral-zone trap. Friedman noted that one reason behind this change was that Boudreau's high-pressure, man-to-man checking system had a tendency to allow small mistakes to turn into major breakdowns, as some people have pointed out before. After the break, I'll use some video screen shots to diagram a breakdown that resulted in a goal. After that, I'll show how the play could have turned out differently. Finally, I'll conclude by diagramming the Caps' "new" system.

This first set of still shots comes from the December 11th game when the Caps hosted the Colorado Avalanche. Red symbols denote things the Caps did or could have done, whereas the Avs' actions are denoted in blue. 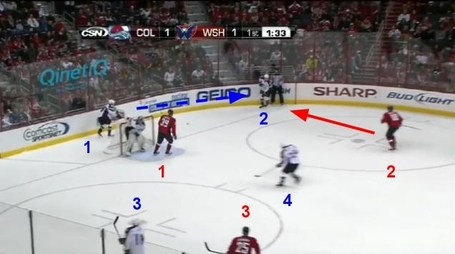 In this sequence, the Caps' 4th line is on the ice with David Steckel (1) flanked by Matt Bradley (2) and Jason Chimera (3). They're in the typical aggressive forecheck that the Caps have used for most of Boudreau’s tenure, with all three forwards below the offensive blueline, despite the fact that the Avs' defenseman Matt Hunwick (1) has clear possession. Steckel is (sort of) pressuring the puck, and Chimera is guarding Brandon Yip (3) while Bradley is moving to try to take away the outlet pass to Ryan Wilson (2). The dotted blue line represents the pass that just happened from Hunwick to Wilson. Right now, if Wilson tries to get the puck to Paul Stastny (4), Bradley and Steckel are in good position to create a turnover. 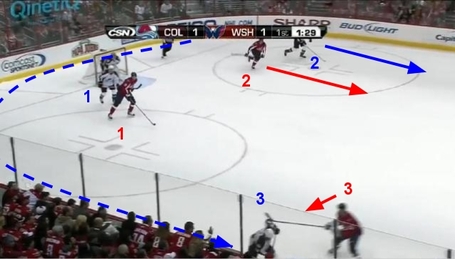 Instead of trying to force the puck to Stastny or chip it to neutral ice, Wilson sends the puck hard around the boards to Yip. Chimera moves to check Yip while Bradley and Wilson race up ice. The Caps are still in good position, but you can see that Bradley's aggression could allow Wilson to counter-attack and potentially create an odd-man rush. 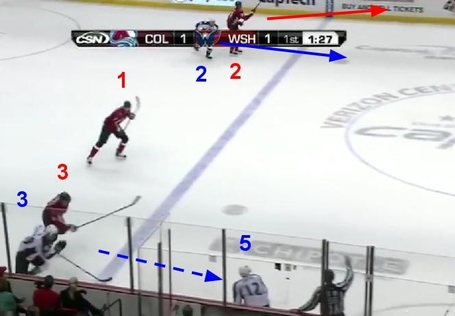 Here you can see Yip getting the puck to Kevin Porter (5) in the neutral zone. The Caps aren't necessarily in bad shape yet, since the numbers are even up ice (there's one Avalanche player off-screen to the left), and Steckel could potentially apply backpressure. There are two things to note about this screen shot. First, there is a ton of time and space for the Avs in the neutral zone. All three Caps forwards are still below the offensive blue line, and the Caps' defenders are already behind the red line. Second, Bradley is heading to the bench for a line change at the top of the screen shot, as denoted by the red arrow. In the Caps' old forechecking scheme, the off-side winger's responsibility was to skate back hard to fill the lane to reduce the potential for an odd-man rush against the two defenders. Bradley clearly thought that Wilson wasn't a threat to join the rush and that the Caps had numbers back (which they did, technically), so he thought he was safe to go for a line change. He wasn't. This was the first breakdown, but as will become clear, the Caps should have been able to recover. 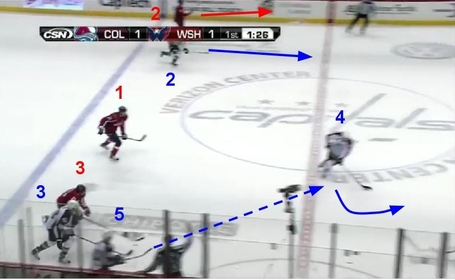 Here we see the consequence of all the time and space the Caps gave the Avs in the neutral zone. Porter has an eternity to hit Stastny with a pass and Stastny has more than enough room to receive the pass and turn up ice. Away from the puck, Wilson has taken advantage of Bradley's line change and is now charging up the ice in the space that Bradley left behind. Of note, the Caps' defensemen are still off-screen. 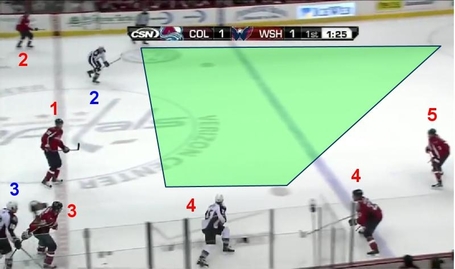 The green-ish trapezoid represents all the time and space that Statsny has to make a play because the Caps' defensemen, Scott Hannan (4) and Tom Poti (5), have backed off so far. At the same time, the Caps' forwards aren't applying any backpressure because, in Boudreau's man-on-man system, that's not really their job. Still, both Steckel and Chimera are coasting back instead of skating - at least Chimera is checking someone; Steckel's just floating. The real culprit in this screen shot is Poti. In Boudreau's system, he's supposed to be alongside Hannan about 15-20 feet away. Instead, he's in no-man's land. He's not pressuring Stastny, he's not preparing for a dump-in, and he's definitely not covering Wilson, who now has a head of steam.

The following video shows how the play ends up (sorry for the ad):

Wilson jumps into the space left by Bradley's change and Poti being out of position and Stastny sets him up easily with a pass. Poti has no chance of getting over to cover Wilson, and Michal Neuvirth is left to face an opponent barreling unchecked down the off-side. Though not a scorer, Wilson has little difficulty burying this relatively easy scoring chance.

What's odd is that Wilson was so open on what wasn't even an odd-man chance; the Caps had numbers back the whole way. Two small errors - Bradley's change and Poti's poor positioning - left Wilson with more than enough time and space because of the way Boudreau's system is set up. The following screen shots will attempt to diagram how the Caps could have avoided this fate. 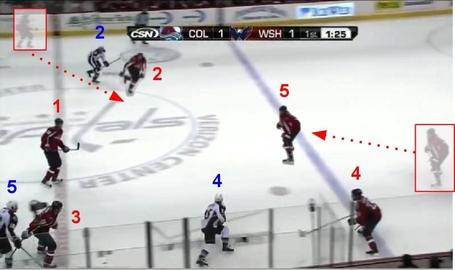 This image represents what might have happened if the Caps had played Boudreau's old system perfectly, with the dotted red arrows showing where Bradley and Poti should have gone. If Bradley covers his lane and Poti is in his proper position, Stastny would not have had as much time and space to hit Wilson with a pass. If, however, just one of these errors were to have happened, the result probably still would have been a decent scoring chance. If Bradley backchecks but Poti is out of position, Stastny could have easily gained the zone with speed. If Bradley still goes for a change, but Poti steps up, Stastny probably still has a decent lane to make a pass to Wilson, and given that Wilson had a full head of steam coming through the zone, Poti would have had a hard time covering him. Admittedly, this play represents more than one single breakdown, but even had the Caps only made one error, they're vulnerable because everyone is just marking one opponent - there is little to no mutual support.

How might this play have looked in the Caps' new system? 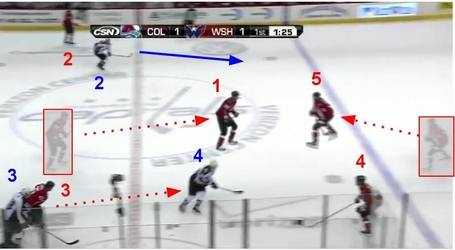 In this screen shot, I assume that Bradley goes off for a change regardless, because his hard backcheck responsibility is an artifact of Boudreau's "old" system. Again, the dotted red arrows show where Caps players should have gone in the "new" system. Instead of dropping back into no-man's land, Poti steps up and plays his position as he ought to in Boudreau's old system. So far, no big difference - the big change is what the forwards do. Rather than guarding their men as they're supposed to do in Boudreau's old system, they backcheck hard through neutral ice. If you watch the video above, you can see Steckel coasting through almost the entire neutral zone. Had he skated back harder, he would have occupied the passing lane that Stastny used to find Wilson. At the same time, Chimera could have used his speed to apply backpressure to Stastny, reducing the amount of time he had to pull up and wait for Wilson. 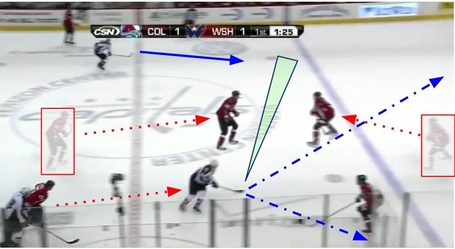 This somewhat confusing picture represents an alternative to the picture that showed the time and space available to Stastny through neutral ice (the last picture before the video with the green trapezoid). If the Caps had backed off on their forecheck or backchecked harder, as the new system calls for them to do, Stastny's options would have been much more limited. He can try to make a perfect pass in the tiny sliver of time and space that the Caps' backcheck has left him, but that's a very dangerous pass and could easily be a turnover and odd-man rush the other way. His safest and most likely course of action would be to dump the puck in (dash-dot blue arrows) and let Wilson skate onto it. The Avs might still have gained the zone, but they almost surely wouldn't get a scoring chance.

What I've diagrammed above isn't a true trap, per se, because the Caps forecheckers didn't drop back to neutral ice immediately upon giving up the puck in the offensive zone. Still, the idea remains - clog the neutral zone by getting back quicker on the backcheck. What these screen shots show clearly is the tendency of Caps defenders to back in and concede the blue line. This is due in part to the relative lack of speed among Caps defenders (Jeff Schultz, John Erskine, Hannan and now Poti are all less-than-spry), but it's also caused by the system that Boudreau prefers to use. As evidenced by the first several screen shots, the Caps' forwards made little to no attempt to slow up the onrushing forwards. They essentially conceded center ice to the Avs and left their defensemen to bear the brunt of the Avs' ample speed. Under those circumstances, it's somewhat understandable that Hannan and, to a much greater degree, Poti backed in so far.

Just to illustrate what a "true" trap looks like, here are several screenshots from the end of the December 28th game against the Montreal Canadiens. 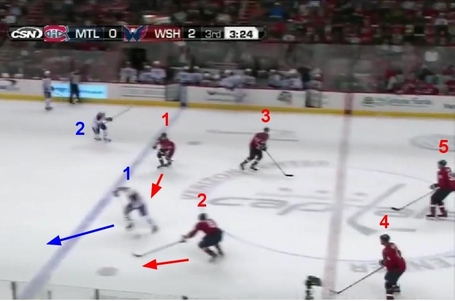 As you can see, all five Caps skaters are in the neutral zone. Alex Ovechkin (2) is challenging Mathieu Darche (1) and Nicklas Backstrom (1) is applying backpressure, forcing him to regroup in his own zone. The remaining Caps, Mike Knuble (3), John Erskine (4), and Jeff Schultz (5) are all helping to clog up the neutral zone. Also, note how every Cap player on the ice has only one hand on their stick and they're keeping their sticks active and in passing lanes. The contrast with the play diagrammed above, wherein almost every Caps player is coasting with both hands on their sticks and their sticks hanging uselessly in the air, is stark. You can also see Benoit Pouliot (2) begin to gain speed through the neutral zone. 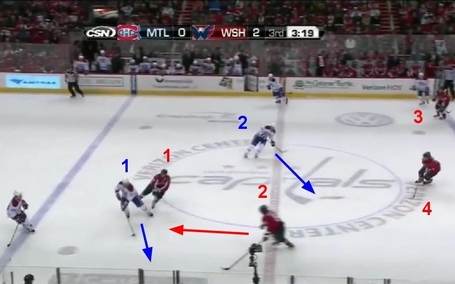 Second verse, same as the first. The Habs' puck-carrier Darche essentially has nowhere to go. Pouliot has speed through the zone at center ice, but Darche can't see him, and even if he could, it's a dangerous pass. The Caps' pressure leaves him with only one decent option. 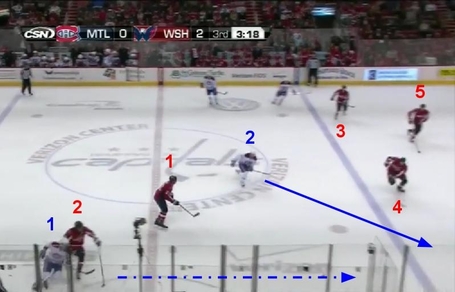 Darche's only remaining option at this point is to dump the puck in (actually it should have been icing). Pouliot is coming with speed, but there are three Caps defenders back, and they recover the dump-in with relative ease and move the puck back to center ice.

The trap is no panacea; it won't fill the second-line center void and it won't heal Tom Poti's groin. It will, however, help to compensate for the Caps' lack of speed at certain key positions. More importantly, it will give the Caps the ability to clamp down on their adversary when they get a two-goal lead, a capability they demonstrated ably against both Montreal and the Pittsburgh Penguins in their last two games. Should they sustain it, this ability will serve them well going into the playoffs.

On a final personal note, Bruce Boudreau deserves a great deal of credit for implementing these changes. He has made his distaste for the trap clear and, as Friedman points out, it's the first time in his career that he has used it. Personally, I don't care for the trap either, but I care even less for losing. Using the trap judiciously gives this team a much greater chance of winning now and in the playoffs. As one who has criticized Boudreau in the past for failing to adapt as the situation warranted, I must admit that this is a major step in the right direction.