Your savory Sunday brunch links were cooked up this week on a portable Coleman propane grill:

Two Capitals' prospects took part in their respective World Junior Championship national team evaluation camps this week. Here's a bit of a look back at how they did.

A move from centre to left wing on the hottest line in camp paid off for Cody Eakin.

Eakin, who played centre as the Whites beat the Reds 6-3 in the first intra-squad game on Friday night, moved onto the wing with centre Sean Couturier and Louis Leblanc and combined twice with Leblanc on goals and got another goal unassisted.

Both Eakin and Leblanc were late cuts from last year's team for the world junior championship, but they have taken a leg up in trying to make the Canadan side for the 2011 tournament in Buffalo, N.Y.

"Me and Louis were talking about it on the bench," said Eakin. "We both said it was a pretty bad feeling and we're not going to let it happen again this year. The game was really fast. We turned it on in the second period and didn't look back from there."

"He had a great game," said Leblanc. "Once again, we clicked."

"Right now in our evaluation of the team our strength is through the middle, to the point that there are some really good centremen who will probably get a shot at playing the wing," said [Head Coach Dave] Cameron.  "We wanted to see Cody. We're going to need versatility. Guys will have to move around. He's one of the guys we think is capable of doing that. He demonstrated that. He was a very good player in both games at both positions." 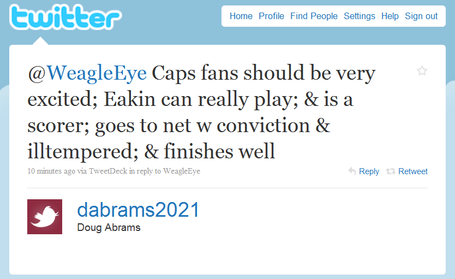