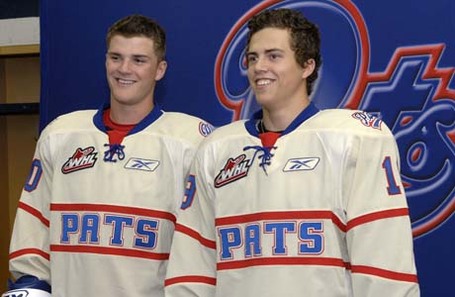 There's not a whole lot of actual hockey to report on this week, so instead we'll offer up some fashion news, interviews and a very unique community service project.

As noted above, Garrett is having quite the fashionable August.  First his team rolled out their new-old third jerseys.  How old? Well, they harken back to the 1924-1926 seasons and the Pats won a Memorial Cup wearing them. But the sweater he's wearing in the picture needed some additional accessorizing - so now it comes complete with the captain's "C." The Pats' brass made it official on Tuesday; Mitchell will lead the team for the 2010-2011 season.  Congratulations, G.

The Pats' training camp kicks off on Friday.

Philipp has arrived in Kingston from his native Germany to prepare for the upcoming season.  Before he left for Canada, he gave a nice interview to his hometown paper.  Here's an excerpt (with thanks to GoogleTranslate):

How do you have the drafts of the North American professional league NHL pursued and are you satisfied with the result?

Grubauer: I watched the draft at home with my parents. It was very exciting and done as the first and second round were, I'm already become a little nervous. But when Washington finally came, I was very pleased. I think this is the best thing that could happen to me.

What are your goals with Washington?

Grubauer: First of all I want to sign there. Then of course I want to work your way through the AHL, playing in the NHL season record, and later for Washington in the NHL play.

Grubauer: I play next season for Kingston. We want to play in any case above.

How is the further preparation?

Grubauer: In September I go to a rookie Camp and if I do well there, then I can go to the main training camp. That would be great, there are then also Ovechkin and other top players. If such a shot at me, I could learn a lot.

Were you ever in such a camp?

Grubauer the beginning of July I was in Washington in a Prospectus Camp. This was an introduction for our young players, so we know the Organization.

Olaf Kolzig has long been a German in the gate of Washington. Is he your role model?

Grubauer: Actually, Robert Mueller is more my role model. He was also Rosenheim and has brought it very far. I will also create.

Evgeny Kuznetsov has returned to his regular duties with his KHL team.  As part of the season's kickoff festivities, the coaches and players were invited to a meeting with Chelyabinsk governor Mikhail Yurevich and other dignitaries of the province. Governor Yurevich had a general message for the team.  And a specific message for "Kuznetsova."

In his opening remarks, Mikhail Yurevich, said: "I am pleased to welcome the "Tractor ". I want to bring to the wishes of the team and the city. We believe in the team. Ice hockey in our region - the number one sport. In" Tractor "suffer everything. And we would like to team up to its status. We want this season, "Tractor" reached the final Gagarin Cup. It is often said that this is impossible. But we have everything to fulfill such a task. No excuses can not be. "

The director "Tractor" Vladimir Krechin introduced the Governor of all the team. Special attention was awarded the 18-year-old striker for Traktor and the youth national team of Russia Yevgeny Kuznetsov. "You are not going to the NHL?"  Yurevich asked Kuznetsova. "I think you should have two years to play here, to gain experience."

But to get the full effect of this state visit, here's a video.  A long line of hockey players in their first-ever suits facing a long line of dour dignitaries, like the worst Congressional hearing ever.  It's all in Russian but it's not too hard to pick out young Geno.

Traktor played the Kazan Ak Bars yesterday.  Kuznetsov got his first preseason point (and fourth penalty minute) with an assist in a 3-2 loss.

and still manage to get the puck to his teammate for the goal.

Hockey teams are well-known for their charity work for and participation in their local communities, and hockey training camps are known for their team-building activities, but the MAINEiacs had an unusual opportunity to blend the two.  Sometime between Thursday and Friday of last week, some vandals went through Lewiston's Riverside Cemetery and toppled ~150 headstones.  Here's what happened next:

Dixon discovered his grandparents' headstone was among the 150 toppled at Lewiston's Riverside Cemetery sometime between Thursday night and Friday morning.

Upset over the desecration of his family's memory, Dixon was just leaving the cemetery when the donated bus from Northeast Charter and Tour Co. Inc. of Lewiston pulled up and out came dozens of hockey players. Gloves in hand donated by Marden's and Home Depot, the entire team — from the general manager to the youngest players — arrived eager to give back to the community they call home roughly eight months of the year.

And yes, here's Sam Carrier (in the yellow jacket) doing his part: 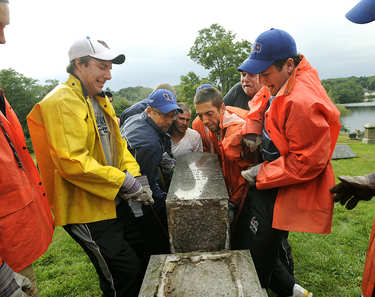 This unique service project has gotten some notice in USA Today and the Boston Globe.  The team will put down the work gloves and pick up their hockey sticks to play the Quebec Remparts on Friday.