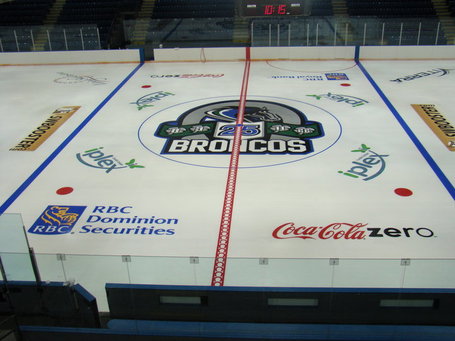 Cody Eakin and the Swift Current Broncos will be skating on 25th anniversary ice this season.

This week's month's Capitals Farm Report will attempt to round up the summer news for the Caps' prospects and peek ahead to their upcoming training camps -n- such.

Forward Evgeny Kuznetsov, defenseman Dmitri Orlov, and the Team Russia U-20s have just completed a three-game sweep of a badly overmatched Team France.  The French squad was visiting Russia as part of the celebration of the "Year of France in Russia," and their hosts welcomed them with a tour of the Kremlin and consecutive shellackings of 8-0, 7-4, and 7-1. They played the three games over four days in three different cities, with the final match contested on a "Canadian" dimensioned rink in a Moscow shopping mall.

Orlov in particular had a stellar tournament, finishing 1-6-7 for the three games, with 5 of those points (1-4-5) coming in game three on the smaller North American-size ice. Perhaps Caps development camp taught him a thing or two about playing hockey in a smaller rink at a shopping mall?

Kuznetsov had a bit more of an adjustment to his linemates, was moved from center to wing, and finished the tourney with a tidy 1-2-3.  He also had 25 PIMs thanks to a fight/brawl in the third period of the third game for which he was assessed a 5 minute major and a 20 minute game misconduct. The French player was found to be the instigator.

Both players have returned to their KHL teams - Kuznetsov back to Traktor Chelyabinsk and Orlov to Metallurg/Kuznetsk Bears, currently training in the high mountain air in Switzerland.

Dima has some unfinished business from the previous season, however.

He was judged to be the MVP of the 2010 MHL (KHL youth league) playoffs as his 19 points nearly propelled his Kuznetsk Bears to victory in the Kharlamov Cup finals.  The league is a little late in awarding him his prize, but the presentation they've planned will more than make up for the delay. They have named the top awards after the "living legends" of Soviet/Russian hockey, and each "living legend' has designed and commissioned his own trophy and will present it personally to the player:

Hmm.  Vitaly Davydov.  I had to go look him up.  He is currently a vice president of UHC Dynamo, and a look at his hockey bona fides show that he is indeed a living legend:

A rock-solid defenseman; though smaller than average, played on three golden Olympic squads, highlighting an international career that also included nine consecutive World Championships from '63 to '71. Also a legend at Dynamo Moscow. 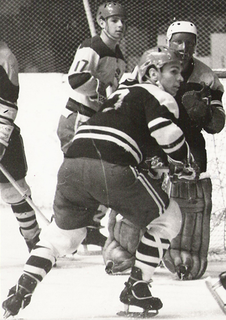 via Vic's Valeri Kharlamov collection
And of the trophy? It's designed and ordered from Gzhel already:

- "My winner, Dima Orlov, wishes to become a top-class defender and play for the Russian national team," said  Davydov.

- What do you know about Orlov?

- So far, unfortunately, not much. But I hope that at the meeting when the prize is awarded, I'll be able to take a closer look.

- How does your prize?

"The most fearless defender of the season."

Remember, the rule is "get good at hockey, get to do cool stuff." Following this rule are Patrick Wey and the Boston College Eagles, making the rounds of cool stuff after winning the 2010 Frozen Four tournament and the title of National Champions.
First, an April visit to Fenway Park and a meeting with Sox skipper Terry Francona.


Then a June invite to the Massachusetts State House and a meeting with Lt. Governor Tim Murray and the numerous BC alumni in the legislature:

The team [was] warmly greeted by Speaker of the House Robert A. DeLeo and Rep. Kevin Honan '81 . After the Speaker addressed the team, the Eagles were escorted onto the floor of the House of Representatives.

The Eagles were then escorted by Senator Joyce to the floor of the Senate, where they again were welcomed with kind words (by Sen. Joyce) and a nice round of applause. After leaving the Senate floor, Sen. Joyce took the team out onto a balcony outside the Senate chamber that overlooks the Boston Common. There he explained some of the building's history to the BC contingent.

And finally, on September 13 Patrick and his teammates will be back in Washington DC - as guests of President Obama. 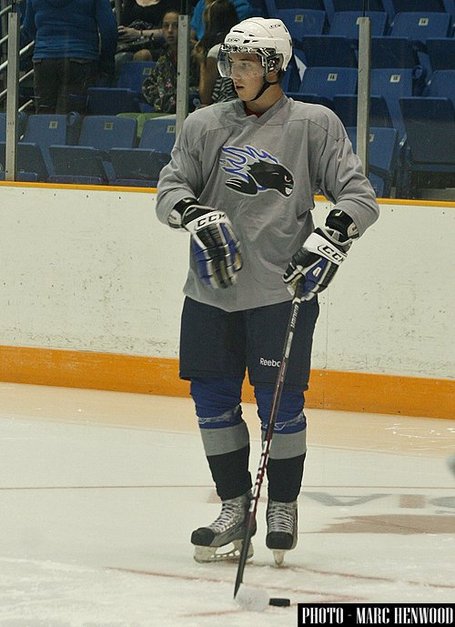 Camp continues through Saturday, with a final intrasquad scrimmage on Friday and then a preseason game against the Halifax Mooseheads on Saturday.

That's the end of the hard/breaking news.  Here's a roundup of the ol' bits and pieces:

Brett is the only Caps prospect guaranteed to play for the Memorial Cup this year as the Majors were chosen to host the tournament.  In addition, Brett's coach Dave Cameron will have a very busy year as he was also selected to coach Team Canada in World Juniors.

Garrett and the Pats are looking forward to their own outdoor experience this season as they are scheduled to face the Calgary Hitmen at McMahon Stadium in Calgary on February 21.  Their game is being held in conjunction with the Montreal/Calgary showdown for the Heritage Classic.

Cody had a nice radio interview on "The Pipeline Show" on Tuesday night.  Shorter version - he's had a pretty good summer. The Broncos' training camp begins next week - Cody will be playing for "Team Sakic" in the black sweaters. [Interview in MP3 format]

It looks like AnGus will have to work super hard to make the Hershey Bears this season - his Allsvenskan team Borås HC appears to have moved on:

Philipp's former Spitfire teammates gathered in Windsor this weekend to receive framed team photos and their Memorial Cup rings.  Grubauer did not attend as he remained home in Germany.  Training camp for the Fronts begins on September 1. Of note - the Frontenacs recently traded away (a different) goalie in exchange for a draft pick.

Sam's training camp began Thursday. But we find he'll be missing some time with the team in September, as he'll [presumably] be at Kettler for Caps rookie camp:

On the blueline, last year's top defenseman Samuel Carrier is back, along with Samuel Finn, who took home the award for being the team's most inspirational player in 2009-10. Carrier and Finn will both be attending NHL training camps in September...

Finally, take a look at the distances traveled by kids and coaches in Major Junior Hockey.  It's really quite ridiculous.

That's it for now, it is amazing to me that I can find more information from Chelyabinsk, Russia, than I can from Minnesota or St. Cloud State.