This is a translated interview with Marcus Johannson from a local newspaper in Värmland.

"I left for Washington with my father Lasse and my girlfriend Amelia on Friday. Throughout the weekend I was shown around Washington by Nicklas Bäckström and got to meet several members of the club's organization. Washington is a really nice city but it didn't look quite as I expected; there were almost no skyscrapers. I'm sure we will feel right at home."
Marcus also had time to check out the White House.

6.3 million Swedish Kronor in annual salary
There were no real negotiation with the Washington Capitals.
"We have talked a lot for quite some time now."
The three-year contract was signed on Monday morning. It gives Marcus 700 000 SEK in signing bonuses and a annual salary of 6.3 million kronor over the next three years.

On Monday after he signed the contract and the press conference were finished it was time to take a guided tour of the luxurious locker room.
"There I got to meet one of the team's players, Mike Knuble."

Marcus are going to have many superstars as teammates.
"It still feels like I'm dreaming I can't believe that I'm going to play together with Alexander Ovechkin and Nicklas Bäckström. I just can't understand that I will be playing with them." 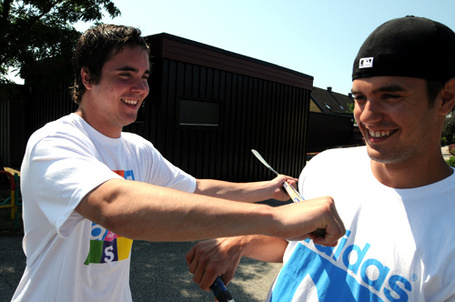 Want to train with Färjestad

This Summer Marcus will train as hard as he can to be well prepared.

"I will talk to Thomas Rundqvist (Färjestad's General Manager) and see if they let me train with them during the Summer.

When will you go back?

"In mid-July, Washington have a training camp for six days then, and I will be there. After that it's back to Karlstad again for more conditioning, and in late August I'm moving to Washington."

Marcus made his debut with Färjestad two years ago against Brynäs (Ed note. Nicklas Bäckström's former club) and was drafted by Washington last summer.

Marcus visit in Washington was his second time in the US. And the team he belongs to is one of the most talented teams in the league even though they lost in the frst round of the Stanley Cup this spring.

"It's a team that can win the Stanley Cup, and that are willing to invest and believe in young players. They play a fun and offensive style of hockey and the organization is really good. I'm glad I ended up there," says Marcus.

"I definitely want to use my European out clause if I'm being sent down to the AHL. In that case I would prefer to play with Färjestad for another season if they still have room for me on the squad."

Färjestad's hunt for a replacement has already started, but if Marcus Johansson doesn't make the team in Washington this season Färjestad will most likely be willing to let him play one more year back home.

The man Marcus is "attacking" in the second photo is his older brother Martin Johansson he is currently playing for Mora in Allsvenskan.