10 years, 67 million dollars, one very happy Viking. Let's take a swing 'round the hockeysphere to see how Nicky's new kontrakt is playing:

An anxious CapsNation was able to breathe a welcome sigh of relief as the long-awaited announcement was made Monday, May 17 that Sverige-on-the-Potomac was here to stay. Superstar center and pending RFA Lars Nicklas Backstrom signed a long term extension to solidify the Alex Ovechkin Line for the next ten years, and 2009 first-round pick Lars Marcus Johansson pulled his #90 Caps sweater over his head for the first time as he signed his three-year entry level contract.

CapsNation had been fretting, on and off, since before the season began, hoping for word that Backis would be RFA no more. We watched as David Steckel got a new K, then Tyler Sloan. Finally - big news! Alexander Semin signs an extension. But only for six million, and only for one (!) year. All the while Lars was quietly dominating the ice on every shift, improving his game in every facet, and raising his pricetag with every scoring milestone and stickless penalty kill and OT game-winning hat trick goal. The worried hand-wringing was giving way to the gnashing of teeth and rending of garments as the calendar edged ever closer to Qualifying Offer Sheet Deadline Day, June 28.

A ray of light appeared on May 12 as Dobber Hockey reported successful negotiations complete with a number and a term, then the hockeysphere fell strangely silent. The silence continued 'til Sunday, when an intriguing press release hit the wires:

"The Washington Capitals will make a significant player-related announcement on Monday, May 17, at 10:30 a.m. at Kettler Capitals Iceplex in Arlington, Va."

Well then. Fast forward to Monday morning, where more intrigue was clearly on the way:

I'm pretty sure Marcus Johansson just walked past me at KCI. Perhaps the Caps will announce the signing of TWO Swedish centers today.

Sure enough, the club held that press conference, proudly introduced the future of the Washington Capitals down the middle, and stepped aside to allow the joyful tossing of weagle-shaped confetti. 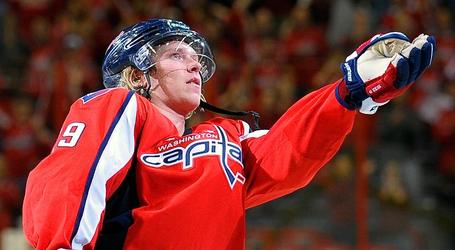 Brian McNally is all smiles. At least until he looks at the cap numbers.

CSN's Lisa Hilary and Nicky share a love of hockey and, apparently, the same stylist. (Videos)

Does this signing mean the terrorists have won? Sorta, according to the National Post.

TSN also runs the wire story. The comments thereto might be worth your time, though they weren't worth mine.

The Strib goes with the wire story as well, but the Wild fans in comments think Semin would look good in a forest-green sweater. Yes please, with a side order of Cal Clutterbuck plus Owen Nolan, so AO won't get too lonely.

CBC would like you to know they had the story first. Neener neener. Commenter Canuck47 had this to say:

Kind of cuts into their cap, but a reasonable signing. Niklas (sic) will be wealthy, but I hope that he realizes that he will be playing in virtual obscurity as opposed to the "god" he could be playing in Canada.

Craig Custance is perfectly fine with this signing. Fine. Just fine. Just look at all the great RFA candidates left! They're fine too. Dammit.

Alex Ovechkin and Alex Ovetjkin could not be happier.

Googletranslate is your friend, Peerless. Tack!

Hey hey we're the Capitals, and we've got something to say.

A possible moving van sighting near the Verizon Center?

BruinsNation - Still grieving, but moving swiftly thru Denial into Bargaining. And then possibly on into Threats.

10 fucking years i have to deal with backstrom on the caps. PLZ TO BE LOWERING THIS EXTENSION! make it one year, if you HAVE to extend

Finally, it is time to rejoice and celebrate. We get ten more years of this: