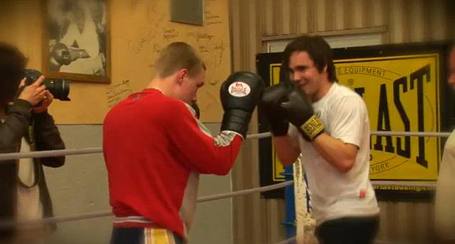 I found this Swedish-language interview with the Caps' newest Viking, apparently given at the airport on his way back to Sverige. (The Backstrom entourage has also apparently returned to Ye Olde Countrie for the sommer as well, so no celebrity sightings in Georgetown tonight.) The interview itself isn't all that remarkable, but may answer a few questions you may have had:

Although Marcus Johansson has now signed with the Washington Capitals, he has a special clause for next season.

MJ: I have a European clause first year, if I don't get a spot on the Capitals I can go and do a season in Sweden or elsewhere in Europe. But I hope it will not be the case.

VFSport: Are you still ready to play some of the AHL if needed?

MJ: Yes, I can imagine few games there and it can certainly be useful. But I do not want to do a full season in the AHL.

VFSport: What are your thoughts now after you have signed?

MJ: It feels great, fun and incredibly exciting. I am really looking forward to coming here and playing and getting to know the team and city.

VFSport: You decided you would sign when you were there [ed. - in Dev. Camp 2009?], if I understand correctly?

MJ: Yes, exactly. I got a really good impression of the club and the entire organization when I came here. So it felt quite right.

VFSport: The fact that Nicklas Backstrom and Alex Ovechkin play for the club did not make the choice more difficult?

MJ: No, ha ha. They are two fantastic players that I really look forward to play with. I got the chance to meet Nick, now that I was here and he's a great guy.

Färjestads GM was not overly surprised by Marcus' decision.

- Both and, given that they chose him in the first round so it is not so surprising.

• How will you act upon it?

- For our part, we of course have full crew if we manage to tie up Rickard Wallin, which we hope for. Then if it turned out later on we would need to add any more.

The fact that there is now an NHL contract Färjestad will get 200 000 dollars for Marcus Johansson.