Match-ups are at the core of any playoffs series, and the first round series between the Capitals and Canadiens is no exception.  Here's how we see the two teams stacking up in seven key areas: 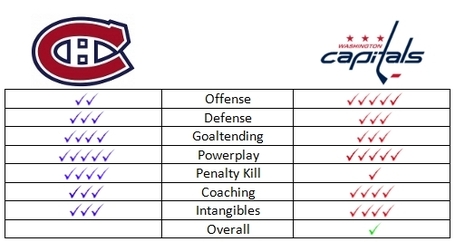 Defense - Neither team is outstanding defensively, but both are solid, which makes sense when you look at each team's depth chart on defense - after the first couple of names, it's "solid-but-unspectacular" defined.  The Capitals are better five-on-five, but the atrocious penalty kill hurts the team more than they'd like to admit.

Goaltending - The netminding situation in the Caps/Habs series is about as interesting as any you'll find in the first round of this year's playoffs.  Each team has two guys who could be NHL starters, and both starters might be on short leashes.  So who has the edge?  Right now, we think it goes to Montreal.  All four goalies serious question marks, but Jaroslav Halak clearly had the best regular season and is probably the player most likely to be a difference-maker.

Powerplay - The Capitals have the advantage here - anyone who finishes as far ahead of the pack as they did this season has a clear leg up - but the Canadiens have, literally, the most successful powerplay in the NHL after the Capitals, both in terms of conversion and in terms of scoring rate.  All things being equal, you have to give this one to the Capitals, but whichever team gets to put their powerplay on the ice more often is the one who's going to  have the advantage here.

Penalty Kill - The Canadiens have good, but not great, penalty killing numbers, and finished the season tied for 11th in penalty kill effectiveness.  However, the reality is 'good-not-great' trumps the Capitals without a whole lot of discussion.  Only one team (Nashville) that's going to be on the ice rather than the golf course next week had worse penalty killing numbers during the regular season than Washington.  That gets you one check mark.

Coaching - Jacques Martin has had a pretty successful career as an NHL coach, as his 556 career wins, eight playoff appearances, and a trip to the Conference Finals in 2003 will attest.  Still, he's made it that far just once and his marriage to his ultra-defensive system is arguably hurting the Canadiens.  After all, a team with Scott Gomez, Mike Cammalleri, Andrei Markov, Brian Gionta, Tomas Plekanec, and Andrei Kostitsyn should do better than finishing last in the NHL in five-on-five scoring.  As for the Caps, Bruce Boudreau obviously has a pretty nice track record but he hasn't proven his ability to take a team deep in the NHL playoffs, and his first-round coaching last year left more than a little to be desired.

Intangibles - It's hard not to like what the Capitals have: a nucleus that has been together for several years and has grown together, great chemistry on and off the ice, a coach that knows his players, and a significant home-ice advantage.  You can't really give a team that hasn't even been to the Conference Finals five checks, but the Caps are about as close as you can get.  As for the Canadiens?  They don't seem to have a lot more, as whole, working for or against them than the average playoff team.

Overall, the advantage clearly goes to the Capitals, who are bigger, more skilled, and more well-rounded than the Habs.  There are only two things that could make this a competitive series: a stellar performance from Halak or Carey Price and a huge powerplay disparity in Montreal's favor.  Barring either of those occurrences, the Capitals should take this one and, hopefully, do it in five games or less.