WARNING: This is going to be long and not exclusive to Delly.

All photography while at the game is courtesy of beta!

About an hour outside of Toronto (on the straightest road I've ever encountered) sits the town of Barrie, Ontario. When finding myself in Toronto on vacation, and having a free night, We (beta and I) decided to go to Barrie (Well, I kinda guilted her into it). I had a lot of the PPP people ask why in the heck I wanted to go to Barrie because supposedly it's pretty boring. Ladies and gentleman this is why: 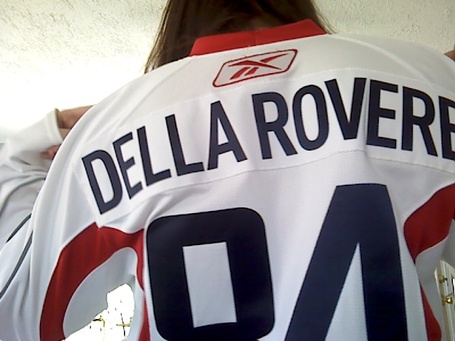 (Side note: I bought that at Caps Con. After checking through all of them, not finding anyone that really struck me, I saw a woman carrying the SDR jersey, got crazy jealous, prayed for her to put it down and snagged it once she did. What can I say, I like the kid)

We drove up to the arena, the Barrie Molson Centre, and parked. We found will call and found our seats, third and fourth row, corner. 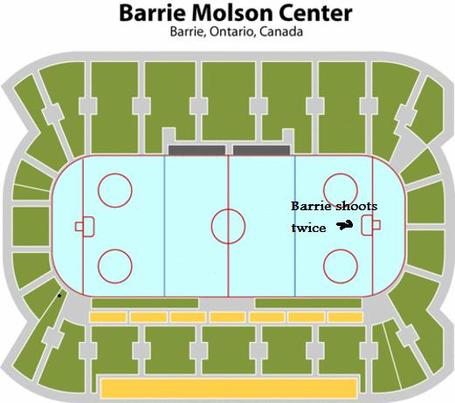 (That dot is roughly where we sat, and for reference this place only sits 4k and some change, with standing room at the back of some sections.) 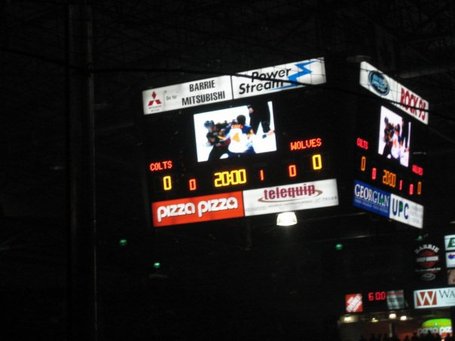 Let's get this party started!

The game didn't start out well for the Colts, Alex Hutchings (Tampa Bay prospect, fourth round - 2009, drafted 93rd overall) received two delay of game penalties in the first 5 minutes of the game, and the Sudbury Wolves scored at 5:14 after Dalton Prout (undrafted) got called for a slash and brought the Colts to 5 on 3.

I do remember seeing Delly get some PK time, but not much, if any PP time.

Philly's Luke Pither (picked up as an UFA) scored on the power play at 16:51 to give the Colts a 2-1 advantage.

Colts G Mavric Parks (named after Tom Cruise's character in Top Gun apparently (h/t YNC for that tidbit!), made some good stops, and probably some lucky ones too. He's undrafted and led the OHL in save % and GAA this season.

The first was a penalty laden affair. See the Game report for the first to see just how

The first intermission was uneventful, other than the fact the kiss cam got the wrong people a bunch and just quickly panned to others, and they had cheerleaders and they were stationed on being in our section. Yuck!

The second period got started pretty quickly when Pither scored his second of the game at :19 seconds in. I didn't get to see it, as I had just walked the entire concourse looking for an ATM so I could buy a program. While on my way back I got a lot of strange looks, what with being in a caps jersey and all, and one guy even loudly said to his friend, "Must be Ovechkin." but once I passed, and he say Delly's name on the back, he said, "Oh." It was pretty satisfying,we caps fans wear more that Ovie, who knew?

(by the way I saw someone in an Ovechkin Team Russia jersey, I wonder if he gets chirped a lot while wearing it...)

I got back just around the the second Colts goal of the period, the second of the game for Bryan Cameron. I noticed that no one had taken the front row seats in our section, so I moved down. This was officially my first time sitting on the glass for a game! It kinda stunk not being able to see the far corner, but it was worth it when the action was at our end. Also I feel like some of the guys noticed beta taking pictures and lingered in our corner a bit to get in a picture. 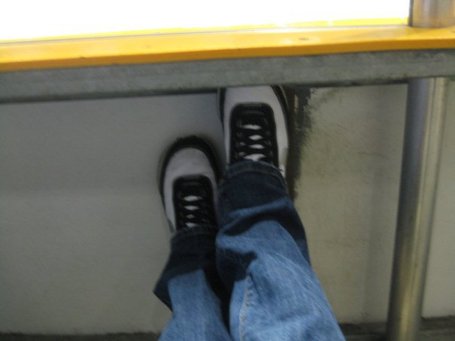 This is how close we were.

The heckling was pretty tame, which was pretty expected what with the high percentage of children there. The Sudbury G's name was named Loverock (unsigned), so of course some guy was chanting that. Once I realized the elusive fourth Staal, Jared (Phoenix's 2008 second round pick, drafted 49th overall) was on the Wolves I tried to think of something child appropriate and funny, but kinda missed the mark with me "You're no Eric!" I'm honestly not comfortable with the fact I technically gave Eric some props there, but what can you do? 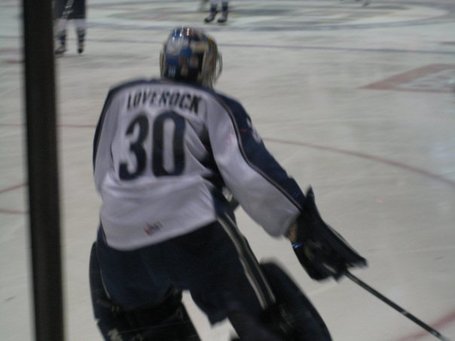 Alexandre Bermistrov C (2010 draft eligible Ruskie [FWIW draftsite.com has him going in the top 10) scored for the Colts at 9:06 to bring the Colts to a 5-1 lead.

A couple minutes later there was a goal washed out on a high stick.

I had noticed all game Delly was getting into little things with people, off face offs ect. but nothing like I saw at 11:45 when Kain Allicock (undrafted) just plain mugged SDR. It does seem like SDR provoked him, but that's largely irrelevant. While SDR was getting up, Allicock goes right back for him and knocks him down again. SDR got up and tried to go after him, but was restrained by a lineman and escorted to the locker room, I believe he got a misconduct out of the whole thing. Allicock had to be restrained by two officials. PIMS from the incident.

I was very impressed with the fire SDR showed and the fact he drew a 7 minute PP. He wasn't bone headed about it, unlike Allicock, who tried to fight the officials. 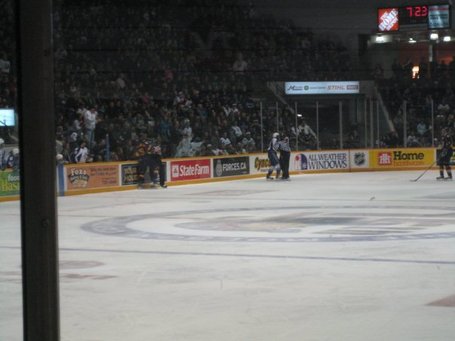 Delly attempting to get back at Allicock. 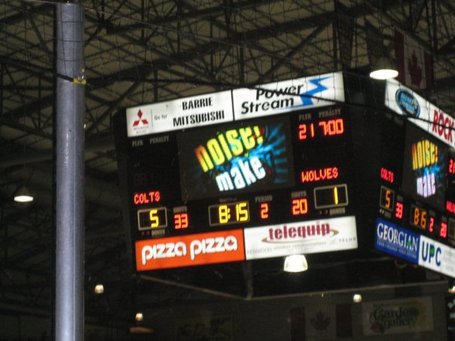 Thanks for the 7 minute PP!

At this point I was worried this would be the last of my SDR experience.

38 seconds later, on the ensuing 7 minute PP the Colts' Bryan Cameron (who assisted on two other goals) scored his third goal of the game! There weren't any hats so either no one noticed, they didn't care because the game was already in hand, or they didn't think it was worth losing their hat over.

During the second intermission when they were throwing Tshirts and I moved on over to try and snag one. While waiting, someone tapped me on the shoulder. "Was Delly drafted by the Caps or is that just wishful thinking?" I then explained I was from Virginia and bought it at caps con etc. etc. He said it was a cool jersey and when he caught a tshirt gave it to me, cool guy! It was some kind of local business shirt, nothing really special so when I got back to my seat I gave it to this kid sitting behind me. Totally worth it, he was stoked.

When the teams came out for the third, so did Delly! He went straight to the box to finish serving his misconduct. It was over at 1:45 so he didn't have to wait long to leave the sin bin.

There was another little brawl at center ice. With three more layers sent off, I was wondering if they had enough players to keep going. 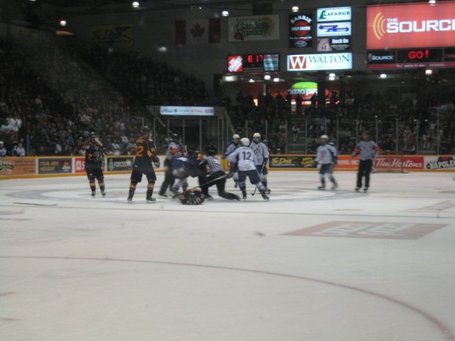 Delly came back in time be on for the final goal against, which was scored by Eddy Leitans-Rinke (Latvian, probably draft eligible 2010) . He ended up a -1 (All of the Colts' goals came on the PP so no one was a plus in a 6-2 game, odd eh?)

Tthey kept playing this graphic of Charlie Horse (the Colts' mascot) spanking the Wolves mascot. Amazing. Can you imagine the VC having a graphic of Slapshot spanking Iceburgh? 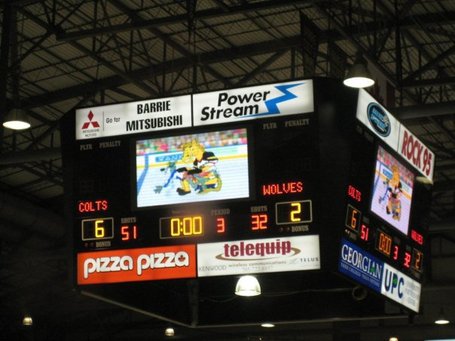 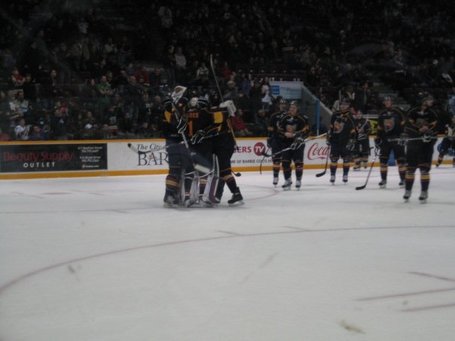 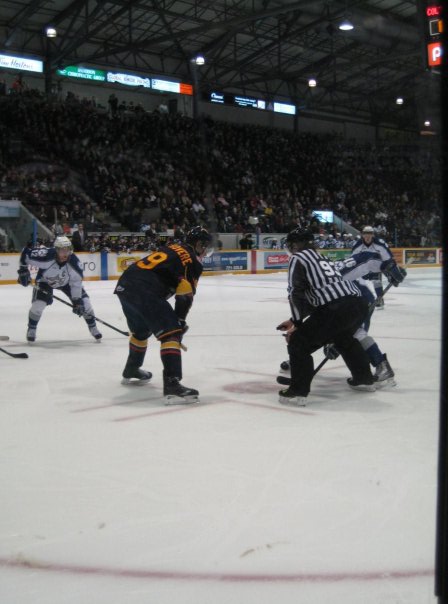 Delly taking a face off! 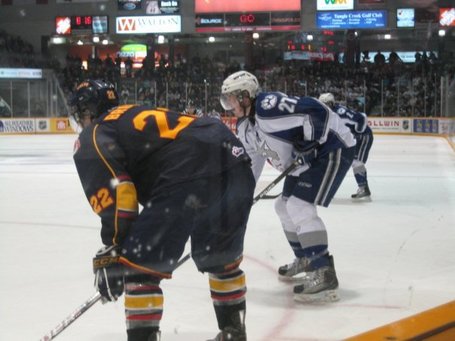 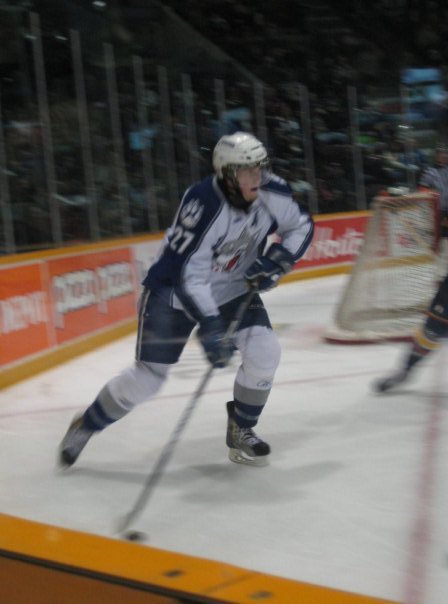 Baby Staal trying to be as good as Eric, failing. 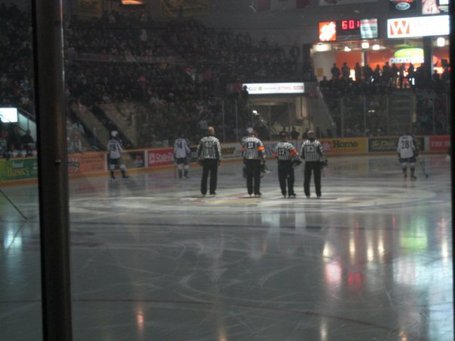 During O Canada, and guess what? Not a single yelled phrase! 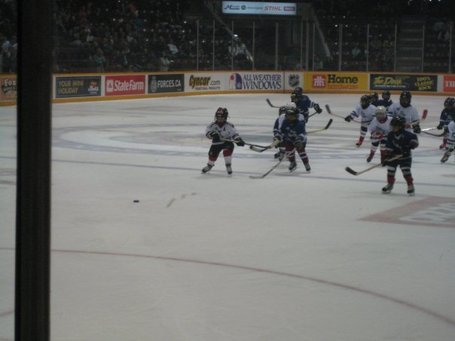 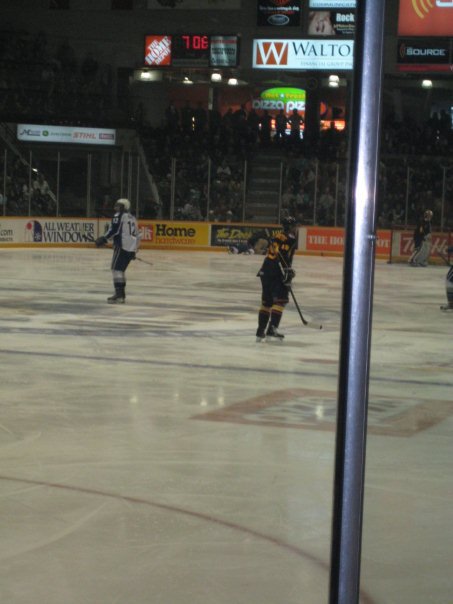 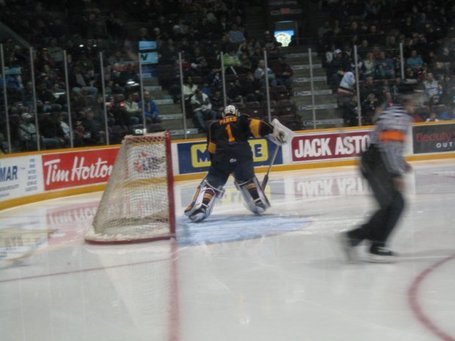 I love when goalies do that! 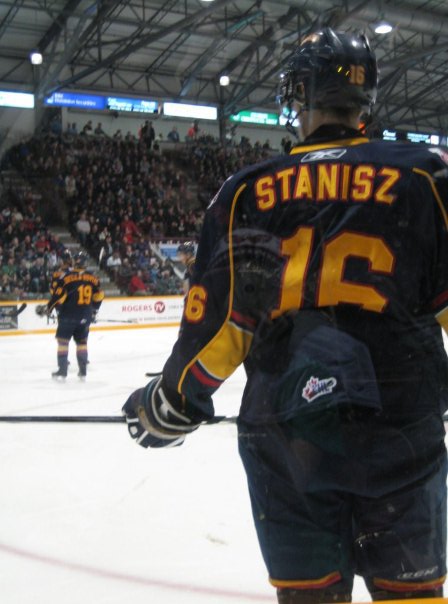 This guy is in a lot of beta's photos. I assume on purpose. Bonus Delly in the background! 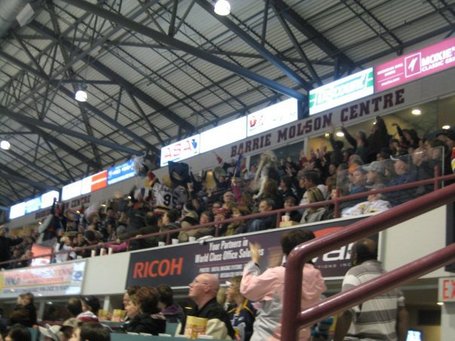 Charlie Horse pumping up the crowd!

What with the misconduct and the excessive PPs I don't think I saw as much Stefan Della Rovere as I expected, but the excitement of the game made up with it!

If you have any more questions I'll try to answer in the comments!