Tom Poti is one of the Caps' most important penalty killers. He leads the team in shorthanded ice time per game (and is 11th in the League in that metric) and plays against the toughest competition. He also has the worst Goals Against/60 at four-on-five of any of the blueliners now in the team's penalty-killing rotation, and that's for a team that's near the bottom of the League in penalty killing ranking overall.

In the past three games, Poti has twice been sent out (along with a couple of forwards) for the toughest task a penalty-killer is asked to do - kill a two-man disadvantage. Twice he and his teammates have failed. And while not all the blame can be put on Poti, two plays he made (or, perhaps more accurately, didn't make) stand out, especially in light of the similarity between them.

First up, Chicago. Down two men, Poti ended up between the puck carrier (Patrick Kane), his own goalie (Jose Theodore) and 'Hawks forward Patrick Sharp, who's camped out at the far-side post. Have a look: 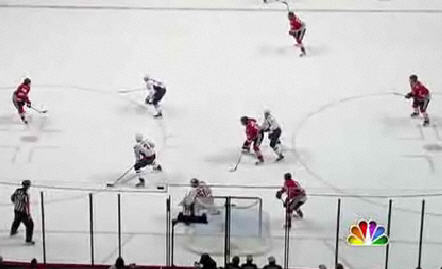 Poti's in pretty good position, except for one thing: his stick. Rather than having his twig to the inside - where it would be directly in Kane's passing lane - it's to the outside where it defends... well, I'm not sure. A moment later, Kane zips a pass to Sharp, who rattles a one-timer off the far post before Jonathan Toews bangs home the rebound (watch it here if you care to). To be fair to Poti, he had been jostling with Toews and just got to his feet and regained his balance a moment before Kane's pass. One-time mistake by a guy with more than 800 NHL games under his belt, right? Wrong.

Two games later, after Shaone Morrisonn's double-minor for high-sticking put the Caps down two men in Carolina, Bruce Boudreau sent Poti over the boards to try to kill the disadvantage. A failed Matt Bradley clearing attempt later and Poti found himself in a similar position to where he was in Chicago four days earlier: 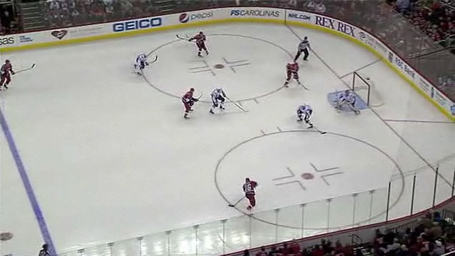 Again, the puck-carrier has the biscuit above the dot with Poti (unlike his teammates) in good position... except for his stick. Jussi Jokinen takes advantage and throws the puck down to Eric Staal for a tap-in (video here).

On both of these plays, Poti presumably is presumably trying to take away the shot when he should have his stick in the passing lane, leaving the puck carrier to his goalie (who has a far better chance of stopping a shot from the faceoff circle than he does a tap-in from the edge of the crease anyway).

These relatively little things may not be killers right now... but a month from now, they very well might be.