This week's Capitals Farm Report takes a closer look at Stefan Della Rovere and the Barrie Colts as the team is having great success and is on the verge of being the best Colts team of all time.

Captain Delly and his Colts had a truly stellar week:

After nearly five months and 58 games played the Barrie Colts have finally surpassed the Windsor Spitfires for first overall in the OHL.  The Colts were given the number two position in all of Canada after defeating the defending Memorial Cup Champions in their first head-to-head match-up back in January.

Barrie has had a better winning percentage than Windsor and still holds a pair of games in hand on the number three ranked team in the Country.  And after defeating them for the second time this season on Saturday night, the Colts are now alone in first place in the OHL with 98 points.

With ten games remaining the Colts sit at 48-8-0-2, and are very close to becoming the best Barrie Colts team of all time.  In the 1998-99 season the Colts set franchise records with 49 wins and 104 points.

A Windsor loss will almost assure the Colts first-place overall in the regular season, which will give Barrie home-ice advantage throughout the playoffs. Windsor has 95 points in 59 games, but the Colts sit with 94 points in just 56 games.

Both clubs have clearly separated from the rest of the field in their respective conference and Williamson is anxious to face a team that's more focused on beating his team than simply trying to slow it down.

Coach Williamson wanted to face a team that isn't merely trying to slow his squad's game down because his team has become quite dominant. Here's some details about the Colts' season from a game report from their Thursday match against the Oshawa Generals:

Barrie, despite its toying ways against much-younger Oshawa, was limited to an underwhelming 3-2 lead midway through the game.

Eventually, though, not unlike many opponents to face the Colts this year, Zador and the Generals came unhinged. The Colts, who take chances with confidence, burn opponents with their aggressive, up-tempo style.

"We're a high-powered offence," said Colts captain Stefan Della Rovere, who opened the floodgates with his 17th on the year.

Barrie scored three times in the second period and added two more in the third. It was more than enough against a Generals squad who, forced to play something other than the trap, couldn't answer to the Colts' deep and explosive forward troops.

Import forward Alexander Burmistrov led the way with a pair of goals and a helper. With one more goal, he'll become the seventh player to join the team's 20-goal club.

Della Rovere is three goals away from becoming the eighth Colt to reach the 20-mark.

Scoring is what the Colts, with a combined 265 tallies, do best. It carried them against Oshawa.

"It's a good feeling, knowing that if we're down by a goal or it's tied, we're going to play great in our own end, and we can score a bunch too," said Taylor Carnevale, who notched what wound up being the game-winner, his 22nd goal of the year.

So, in review, the Colts are a high-powered, up-tempo, offensive powerhouse.  They are ranked first in their division, conference and league, and just notched a second and final regular season victory over a skilled and dangerous rival to secure home-ice throughout the playoffs. They have six players with 20+ goals on the season with at least two more threatening, and a ridiculous 265 teamwide goals for with 10 games remaining.  They can score early and often, or take their time, wear out their opponent, and confidently play from behind.

Raise your hand if you think you may notice anything...familiar about this team's playing style. 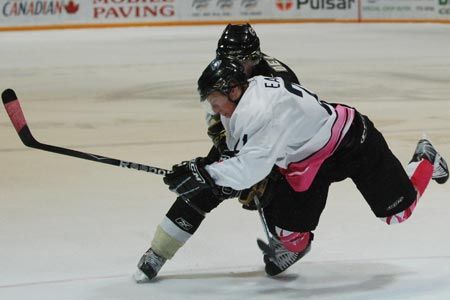