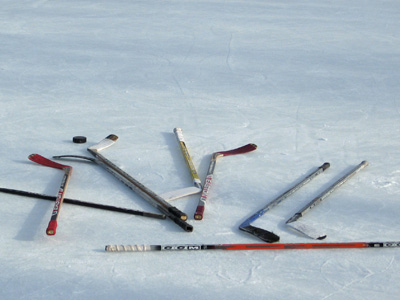 As of now, I have not gone to Kettler to ask for a contract since things are still up in the air. I'm calling them today and my aim is to get a contract by the end of next week under the presumption there are enough skaters and goalies which it seems we'll most likely have. That said, no date has been set yet. The general dates of preference are the 18th, 19th and 26th of December based on CapitalCentre's FanShot, the initial Pick Up Game FanShot and emails I've received. By the way, for those that emailed me, thanks.

More after the jump...

Just a general FYI and reminder on times for Caps’ games: Saturday, December 18. @ Boston Bruins. 7:00 PM. Sunday; December 19 2010. @ Ottawa Senators. 5:00 PM; Sunday, December 26. @ Carolina 7:00 PM. Personally I'm game for any of these dates, but if I had a preference it's the 19th and 26th so as to allow those Rinkers on college break the opportunity to join in on the shenanigans.

Rink Rabbits, I'll leave it to you to coordinate the details and set up of the pre-game/post-game festivities, puckbunny shirts, etc. As for that, there's been general concerns about the pick-up game running late after a 7pm Caps game as well as work concerns for the following day on Sunday Caps' games. Alternatively, we could also have a pick-up game on a day the Caps are not playing and instead watch some other hockey. I have no qualms about this unless the game features Doc's team. I jest ...

Again, those that haven't done so email my profile address and shoot me a line. Keep this FanPost on the main page with a shock and awe of Rec's. Let's make this happen folks. Thoughts?

Have at it people.

UPDATE: It seems 12/30 is the way to go the more and more as this thread grows. I will try to buy some more time. That said, if I don't hear from anyone by tomorrow at 3pm midnight, I'll proceed with getting a contract in place with Kettler for time on the ice from 7:45-9pm on December 30, 2010. Hell, this should be an incentive to have a Rink New Year's/Winter Classic's Eve Eve party. Any objections? Speak now or forever hold your peace.

UPDATE II: First poll adjustment FAIL. See fresh one below for a re-tally of preferences.

UPDATE III: Emailing Kettler tomorrow (12/8) morning to confirm reservation for ice time on 12/18 and 12/30. Will take care of contract and payment after work. Skaters/Goalies -- Accepting reimbursements now and would greatly appreciate it if I can get those ASAP. Just click on link below for transaction via PayPal. Considering I may not actually make it on the 18th, I thought the PayPal route would be an option. No biggie if you can't or don't feel comfortable getting payments prior to the pick-up game via PayPal. As long as I'm not stuck with a $500 bill afte rwards, I'm good. Fixed dollar amount for payment is based on 18 players (i.e. 16 skaters and 2 goalies.) Docciavelli has offered to cover pre-payment for ice time on 12/30. When I get confirmation from him and we've sorted things out, I'll be set up similar link to send reimbursements to him shortly.

UPDATE IV: It's a done deal. Pre-payment and signed contract sent to Kettler. Japers' Rink is OFFICIALLY ON THE ICE! Depending on which game you're playing in, click on links below to reimburse me (12/18) and Docciavelli (12/30) for the pre-payment of the ice times we fronted. Japers' Rink© logo via J.P. 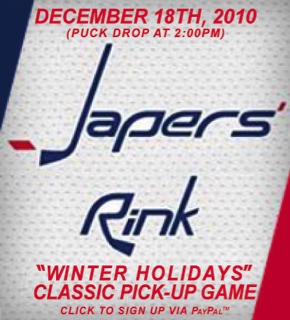 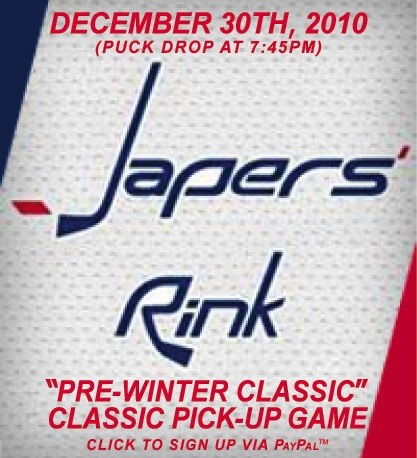 On the ice is twice as nice. Are you game?