Just ten names were called in between those of Semyon Varlamov and Michal Neuvirth at the 2006 NHL Entry Draft, and in many ways they're even closer today then they were then, both professionally and statistically. Case in point, once the puck dropped on Saturday night's game in Calgary, Neuvirth had started his 29th NHL regular season game - the same number of starts as Varlamov has. Here's how the two compare over those games:

You'll notice that the wins and losses don't add up to 29 for either man. Neuvirth failed to complete four of his 29 starts (most recently when he left with the flu against Boston, and against Montreal and in back-to-back bad starts in Florida last season); Varlamov has only left one game he started (that a rough outing in Philly at the beginning of last season).

The two have arrived at their relatively similar numbers via different routes - Varlamov seemingly adjusting to the NHL game remarkably quickly (thanks, of course, to those 13 playoff games he had after his first six starts) and then struggling with injuries, and Neuvirth fighting a bit of early inconsistency before responding to a heavier workload and settling in. Here are the two netminders' career-to-date GAA (top) and save percentage (bottom) over the course of their 29 starts: 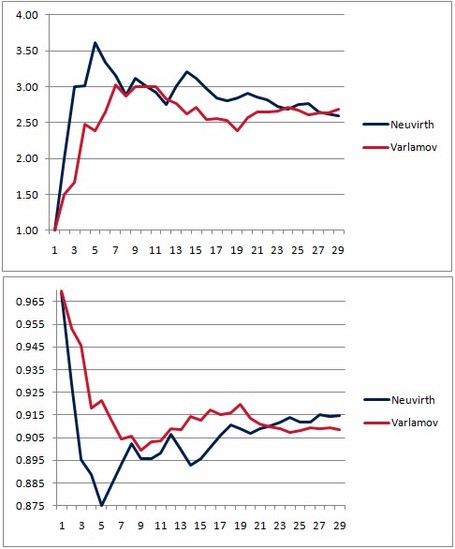 What we see is that over the last ten starts, these two have been headed in opposite directions.

For Varlamov, start number 19 was a 3-0 shutout in Tampa Bay back on December 7, 2009, after which he missed two months with a wonky groin, followed by the Olympics, an up-and-down end to last season, and renewed injury woes this season so far. So what the graph doesn't show is that Varlamov has started just ten regular season games over the last 329 days, and is 3-3-4/3.22/.887 in those starts. How important is it for Varlamov to solve his injury problems? In the ten games and 39 days leading up to (and including) his December 7, 2009 injury, he was 7-1-2/1.87/.937. The ability is there, obviously, but it's critically important that Varly get - and stay - healthy, so he can find his game.

As the Caps turn the calendar and head into November, Varlamov is apparently close to returning to practice and, presumably, game action soon thereafter. And when he does, expect Bruce Boudreau to split the workload pretty evenly between the two. Unless, of course, the trends each young man has established continue.