Shifting Focus to a Focus on Shifts

Share All sharing options for: Shifting Focus to a Focus on Shifts

"We'd like to corral him, but what're you gonna do?" - Bruce Boudreau on Alex Ovechkin's propensity for taking lengthy shifts, 4/30/09

"It's back and forth and it's trying to convince the players that [they should be thinking], 'Oh, I know I’ve got a chance [to skate the puck in] on this but I’ve got to take the high road and dump it in and change.' Rather than go up there [into the attack zone] and then all of a sudden you’re going, 'Oh man, now I’ve got to go back [check] because we didn't score. It's a work in progress, but I’m pretty confident that it's going to get better." - Bruce Boudreau on his team's propensity for taking lengthy shifts, 10/22/10

Early in the second period of last night's 4-1 Bruins victory over the Caps, Patrice Bergeron gathered the puck below the Washington goal line and fed it out front to Jordan Caron. Here's how the Caps' were positioned in their zone: 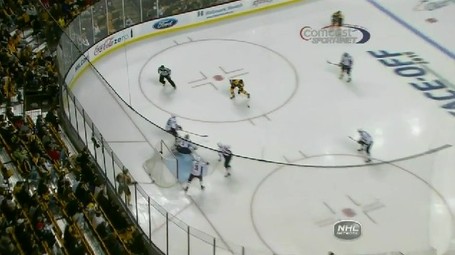 That's Alex Ovechkin coasting in from above the circles and Nicklas Backstrom on top of the crease to the right of goaltender Semyon Varlamov. Neither forward was in a position to make a play on Caron, and Varly never had a chance. 2-0 Boston.

Of note, both Ovechkin and Backstrom had been on the ice for more than 1:50 (at even strength), an eternity for most hockey players, but not for Ovechkin. The Caps' captain leads the League in shift length and was skating his sixth minute-plus shift of the game (that's out of seven shifts) and his third 1:50-plus shift of the prior four shifts. To put that in perspective, recall that the Detroit Red Wings like to keep their stars' shift lengths at around 40 seconds come playoff time.

The shift length "issue" isn't a new one, but the shift discussed above - even if less by choice and more by the Caps' inability to get a change - is a reminder of why it's an issue (and part of why Ovechkin, Backstrom and Mike Knuble have been on the ice for more five-on-five goals against than any other Caps). And the stats back it up. As Gabe Desjardins detailed last winter, things go downhill fast when players stay out too long:

[T]he break-even point [on the percentage of shots for and against] is around 40 seconds, which is roughly the average even-strength shift length league-wide, and things fall apart after that.

By 70 seconds, only 40% of total shots are shots for.  To put that in perspective, only the absolute worst players in the NHL have shot totals at that level - 40% for, 60% against.  Staying on the ice even just a bit beyond a minute usually turns the average NHL player into a defensive catastrophe on the scale of Wade Belak.

Now, Alex Ovechkin is certainly not the average NHL player. But neither is he immune to the realities of fatigue, both physical and mental. As Tyler Dellow said: "[B]eing on the ice after a minute is sort of like being in a bar after 1:00 a.m. - there’s no guarantee that something bad will happen, it’s possible that something good will happen but the odds are slanted heavily in favour of something bad."

Come April (and May and June), one "something bad" could be the difference between playing on and going home for the Caps, so it's critically important for the team to get this situation under control as soon as possible. And whereas it was famously quipped that the only man who could hold Michael Jordan under 20 points per game was his college coach, Dean Smith, the only man who can hold Alex Ovechkin under one minute per shift is... Alex Ovechkin. It's clear that Bruce Boudreau either cannot or will not.

Boudreau referred to cutting shift times as "a work in progress." But progress, as George Bernard Shaw wrote, "is impossible without change, and those who cannot change their minds cannot change anything." Hopefully Alex Ovechkin can change his mind.