Last night I paid a visit to one of my favorite haunts, The Capital Grille, to grab an impromptu steak with my wife and a friend.  Coincidentally, this famous steakhouse also is frequented by some of our hockey heroes.  Nick Backstrom lists it as a favorite spot, as does Coach Bruce Boudreau.  I sat next to Coach in the bar area one night during the off-season and he certainly seemed to be enjoying himself.

We had to wait a little bit for a table, so I took a stroll around the wine lockers that are available for lease.  It turns out that, in addition to Backstrom and Boudreau, Mike Green and Alex Ovechkin also seem to think they'll dine there often enough to keep several bottles of wine on hand.

After the jump, I'll take a look at what type of juice each of these guys likes to swirl.  Apologies in advance for the crappy iPhone photos (the lighting sucked). 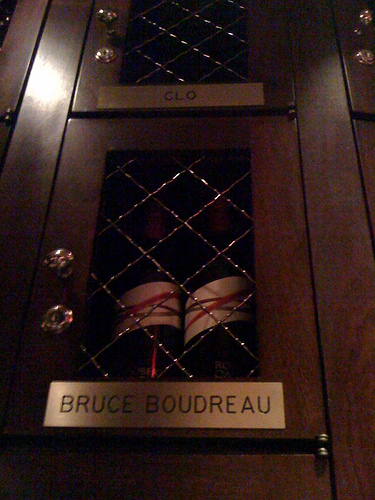 This appears to be several bottles of Robert Oatley red wine (either Shiraz or a Cab/Merlot blend).  This Australian wine costs less than $20 and is not particularly complex.  A fine wine for a casual pizza dinner (and maybe a garden salad!), but an awful pairing for a $45 porterhouse.

Boudreau is cheap?  Nah.  Like the finish of this wine, Boudreau is short?  Too easy.  I think this wine epitomizes why we love the Coach: Both Boudreau and these wines are simple and easy-to-like.  They are slightly sweet, but pretty straightforward, and there's a hint of something smoky lying just beneath the surface.

These are not particularly age-worthy wines, perhaps suggesting that Boudreau's window of opportunity to win a Cup may only be a couple years.

Next up, The Captain: 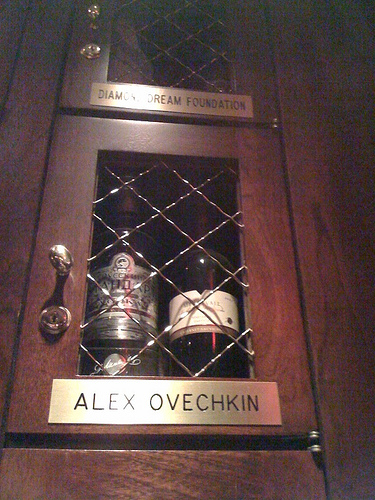 Well, the bottle on the left isn't even wine -- it's a fifth of Russian Standard Vodka (probably the Platinum -- $20-30).  On the right is a bottle of Cabernet from Merryvale, one of Napa's oldest and most famous labels.  This particular wine, however, is a single vineyard bottling of a collaboration with Andy Beckstoffer.  Let's say it's from Vineyard X (can't see the label real well, but that's my best guess).  If so, it's a 100% Cabernet Sauvignon that retails for around $70/bottle.

The Cab is rich, dense and powerful, just like Alex.  It also finishes well, but some people describe it as being a bit over the top.  Sound familiar?  The winemaker states that it will develop complexity with up to ten years in the bottle.  I certainly hope we can say the same for The Great Eight over the course of his contract.  Andy Beckstoffer is essentially the MVP of Napa (2006 "Grower of the Year"), so I guess it takes one to know one.

The website for Russian Standard describes the Platinum vodka as (emphasis mine):

Uniting a passion for perfection with a daring energy and confidence, Platinum has become the favorite vodka among Russia's booming generation of successful urban professionals, who work and play hard enough to put even 1980s New Yorkers to shame.

A vodka of unparalleled energy and clarity, Platinum is sure to meet the demands of the most dynamic, yet discerning drinkers, wherever they might be in the world—as a symbol of achievements past, present and future.

The inclusion of vodka in his locker means Alex is yearning for a taste of his homeland.  He'll obviously bolt for the KHL next year.

Let's pivot to our crafty Swede: 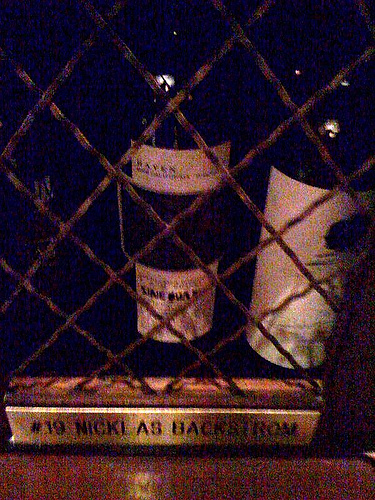 The bottle on the right is Opus One (a boring, expensive, over-rated red Bordeaux blend from Napa).  The bottle in the middle, though, is a Sine Qua Non Raven series!  This is most likely a Grenache-based red blend costing somewhere between $150-$200 per bottle.  That's if you can find it!  SQN is a "cult" winery that only sells their stuff to the lucky few who happen to be on their mailing list.

Nicky is a cult hero, of course!  SQN prides itself on mixing it up every year, giving wines new names with new profiles.  Similarly, Backstrom seems to be adding a different dimension to his game this year: a scorer's touch and a bit of feistiness.  The wine and the center both have strong cores, and are very serious, but beautiful in action.  They're both great right now, but will only improve as the years go by.

Backstrom bought some Opus One, perhaps because he thought that's what he was expected to do.  Let's hope on the ice Lars doesn't feel the need to conform, and he keeps pushing himself to get better rather than rest on his laurels or the names of his famous partners.

And bringing up the rear: 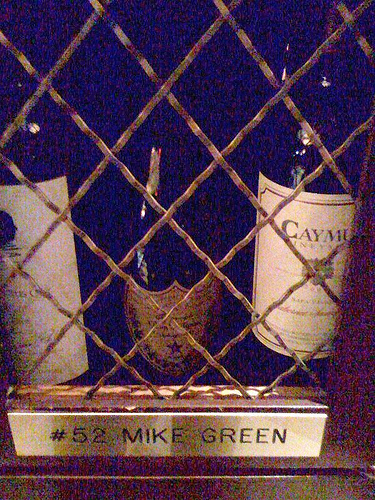 From left to right: Opus One again, Dom Perignon, and a Caymus Cab.  Dom Pérignon, of course, is a high-end Champagne produced by the famed house of Moët et Chandon.  It costs over $100 and is a blend of Chardonnay and Pinot Noir grapes.  The Caymus is a $70 bottle of Napa Valley Cabernet Sauvignon.

While Moët has been producing sparkling wine since the 1700s, the first vintage of Dom wasn't until 1921--the first prestige vintage cuvée.  Defensemen have been around since the founding of the sport, but Greenie the offensive dynamo is a trailblazer.  Similarly, Caymus represents the "new Napa character."  Like Green's skating, Dom is smooth as silk, and the bubbles make it both a joy to watch and experience.  The Caymus is big, rich and satisfying, but some people think it needs to calm down a bit, like Green joining the rush and allowing a break the other way.

What do we hope it doesn't say?

Well, Dom says Gangsta is a little bit too hip-hop.  Dom also is not released every year, so let's hope Greenie doesn't disappear periodically in inconsistent years.  Caymus is not quite as age-worthy as many Napa Cabs.  Is Green built to last, or will he peak early?

So that about does it for our trip through the Caps Cellars.  We finished dinner last night just in time to watch the shootout in the bar area.  A great way to cap a great evening!  Rock the Red (Wine)!