Share All sharing options for: Primary Thoughts on Secondary Assists

Ah, the secondary assist. No other ostensibly positive statistic in hockey receives such derision.

Sidney Crosby wins a scoring title, and it must be because of all the cheap secondary helpers he picked up along the way. Nicklas Backstrom racks up more than 25% more helpers in his first two seasons than his Calder classmates, and the credit goes to a trio of big guns. And so on.

To be sure, playing with talented teammates has its benefits - being able to dish the puck to a teammate who might in turn set up a goal is certainly going to result in higher point totals than skating with linemates who either don't or can't pass. But let's get one thing straight - the League's best playmakers aren't getting fat on secondary assists... or are they?

Evgeni Malkin led the NHL in assists in 2008-09, and only 28% of his 51 even strength helpers (also a League best) were secondary assists. Marc Savard and Mike Ribeiro (tied for second in assists), had 65% and 62% primaries, respectively. But while the top thirty-one assisting forwards averaged 63% primary assists at 5-on-5, that number drops way down to 51% at 5-on-4. (Data after the jump.)

It's a fairly safe assumption that there are more two-assist goals on the power-play than at even strength, so a high percentage of secondaries is to be expected, and there are some pretty remarkable ratios here. Only 36% of Evgeni Malkin's power-play assists, for example, were primaries. Joe Thornton and Savard were at 37%. Ryan Getzlaf (who finished tied for third in power-play assists) was at 35% primaries. But perhaps most impressive of all, Crosby - who led the League in power-play helpers - notched 75% of those as primaries.

So what's the point? I'm not sure. There's nothing inherently "better" about a primary assist - they can be every bit as ugly and cheap as any secondary helper. But if you're looking to knock a player for free-loading on someone else's hard work, get the facts straight... and look at the power-play. 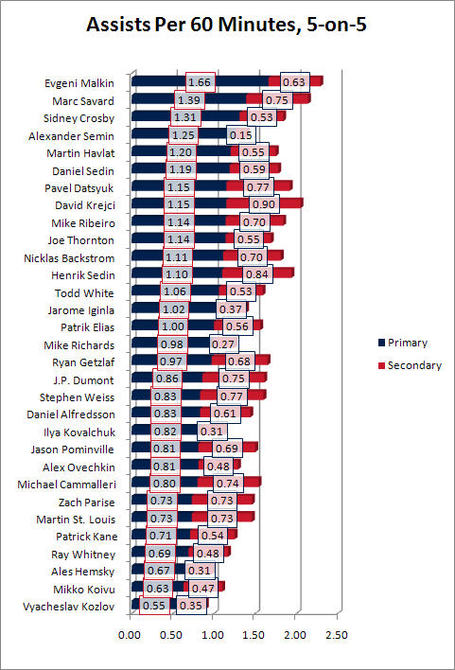 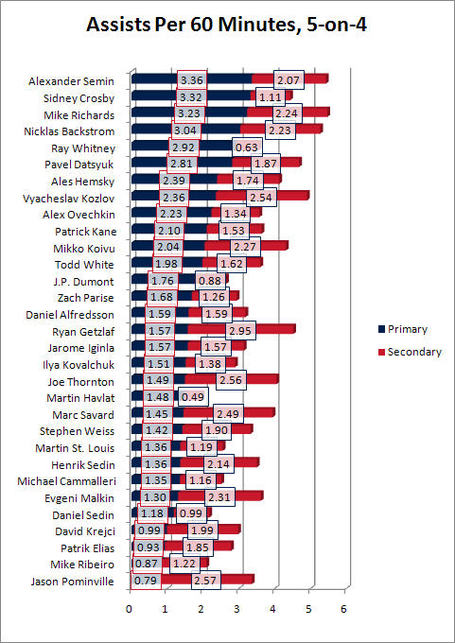