Another year gone by, another round of Rink Wraps complete, and another year of Alex Ovechkin exceeding expectations.

All the votes - more than 16,000 of them - have been tallied, and here are your final ratings for the 2008-09 Caps (and for more math-y goodness on the voting, check out fnralch's FanPost): 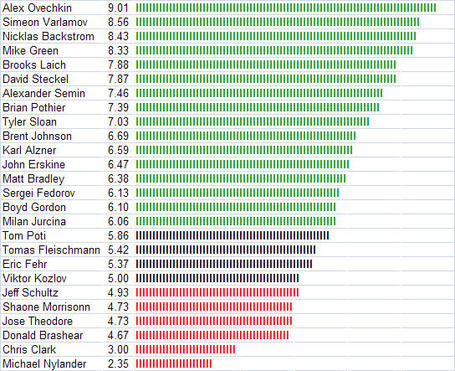 The bars in black represent the five-to-six range of "as expected," with the green and red indicating the unexpected, both good and bad.

Congrats go out to Michael Nylander for setting a new low, breaking Tomas Fleischmann's mark of 4.14 from last year, and to John Erskine, Flash and Milan Jurcina for delivering so little a season ago that their performances this year provided them with the biggest gains in this ratings racket (other than Brian Pothier, that is, whose mere ability to lace 'em up and contribute blew all expectations out of the water). On the flip side, Nyls, Shaone Morrisonn, Sergei Fedorov, Donald Brashear, Jeff Schultz and Chris Clark all saw big drops in their scores.

Oh, and the coach? The scoring system was a little different for him (i.e. based purely on performance), and he came in with an impressive 7.74.

It's somewhat ironic that on an individual level, well over half of the players rated here exceeded expectations (and only a half-dozen played below their anticipated level of performance), and yet the team as a whole probably fell short of where we'd have hoped they'd be at the outset of the season. One thing is for certain - another campaign with a similar end result and there will be a lot less green on next year's version of the chart above.

So what jumps out at you? Any surprises? With whose score do you most disagree?