GM George McPhee sauntered up to the podium, in a bespoke suit (and rocking a bold red tie), and selected TSN's #33 ranked prospect, Swedish Elite League Färjestads BK pivot Marcus Johansson, with the 24th overall pick in the 2009 NHL Entry Draft.  Making this draft year the third time in four years that the Caps have selected a Swedish center in the first round.  The pick was historic in that it established the first time in which seven Swedes were selected in the first round of an NHL draft.

Johansson has suffered a few concussions in his brief career, but enjoyed a healthy 2008-09 season for the Elitserien championship squad. 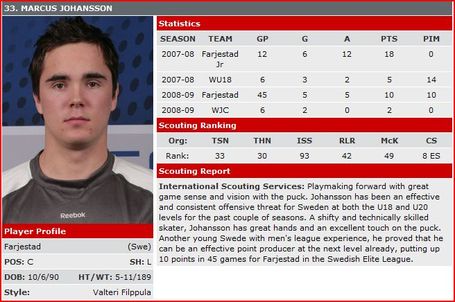 "There's no real strong points to his game, but no weak points, either.  He plays a very mature game. He's a very, very good two-way centerman."

"He doesn't have the same skills, the same understanding of the game [as C Jacob Josefson, who went to NJ with the #20 selection], but this is a guy who makes all the small things right. His passing; he usually comes out a winner in the corners along the boards, so he has good hands; he sees the ice very well and works hard."

George McPhee said he was impressed by the way Johansson played in the final of the 2009 WJC Tournament, noting that he was one of only a few Swedes who really showed up and played well in a hostile environment in Ottawa.

Update:  Video montage highlights and interviews with Marcus and GMGM after the jump:

Post-selection interview with Marcus below:

He'll play in Sweden at least one more season.  Not surprisingly, he mentioned Peter Forsberg and Mats Sundin as his idols.

And McPhee's comments after the first round: