From Alzner to Varlamov, we're taking a look at and grading the 2008-09 season for every player who laced 'em up for the Caps for a significant number of games during the campaign, with an eye towards 2009-10. Last up (sorta), Simeon Varlamov.

Key Stats: In his first eight starts of the playoffs, Varlamov was 6-2 with a 1.51 goals against average and .945 save percentage.

Interesting Stat: Varlamov played in more combined regular season and playoff games (60) in the RSL last season than Jose Theodore played in the NHL this season (59).

Despite good regular season numbers and an impressive pedigree, Varly was still a relative unknown (and the source of baseless ridicule) heading into the post-season, and a player who didn't figure to see much, if any, ice time. But neither his anonymity nor his back-up status would last long, as Varly became a household name soon after relieving Jose Theodore to start Game 2 of the first round series against the Rangers. The young Russian (who turned 21-years-old during the series) dropped that first game, but showed both skill and poise, neither of which deserted him for the remainder of the series, as he'd rally the Caps to a stunning come-from-behind series win after falling behind 2-0 and 3-1. His numbers for the series? 4-2/1.17/.952 with two shutouts, becoming the first Caps' netminder (and second ever) to have two shutouts in a playoff series since Olie Kolzig did it back in 1998.

Varly's hot streak continued for a few more games, as he opened the Penguins series with 33- and 34-save home wins and then gave the Caps a chance to take a commanding 3-0 lead on the eventual Stanley Cup Champions in Pittsburgh by stopping 32 of 34 shots through regulation (his counterpart, Marc-Andre Fleury, had made 16 stops on just 18 shots at the other end over the same sixty-minute stretch). But, eleven minutes into overtime, a Kris Letang shot from the point deflected off of Shaone Morrisonn and past Varlamov and, well, that was the beginning of the end.

But before we move on, this was pretty damn good, too: 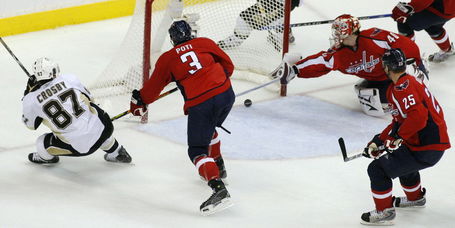 The Bad: At times, Varly's concentration seemed to wander (see Chris Drury's Game 3 softy), and his occasional nonchallance with the glove was perhaps ominous foreshadowing of what was to come. Varlamov showed signs of both mental and physical fatigue as the playoffs wore on, and he admitted as much, even before the numbers started to show it.

But to chalk up the way Varlamov's post-season ended (1-3/4.88/.869 in his last four games) to a lack of endurance may be to excuse flaws in his game (namely his glove hand and his tendency to be overly aggressive at times) and the simple fact that Varly was no longer an unknown. Much like a rookie pitcher who mows down an opposing lineup the first time through the order but gets roughed up the second and third times facing the same hitters, teams have now gone to school on Varly - next year, he won't be catching many teams by surprise.

Finally, Varlamov sustained a knee injury in January that cost him more than a month. This, less than a year after a somewhat significant ankle injury, raises additional concerns about his durability.

The Discussion: How much can realistically be expected of Varlamov in 2009-10? What would it take for him to earn a 10 next season?