Share All sharing options for: Pick 'Em: Norris or Hart? 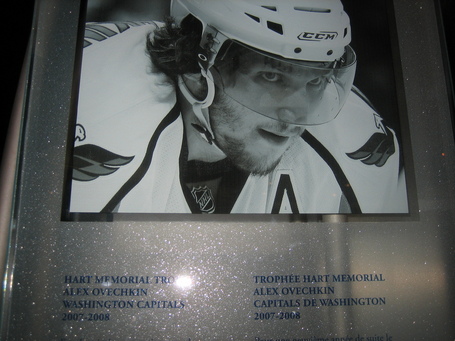 Sometimes you can have your apple pie with ice cream. (Uh, you know, the way the French do it.) And sometimes your favorite local bar serves, as mine does, a "recession special" featuring a heavy-handed pour of mystery whiskey with a can of PBR as its sidekick. But often in life, we can't have it all. We have to choose one or the other. Which leads me to today's Pick 'Em.

Two weeks ago, we asked you to choose which of Mike Green or Alex Ovechkin should be considered to be the Capitals 2008-09 MVP. This one's a little different. While you're sitting back on the couch on the evening of June 18th, watching the Awards Show in Vegas (or, perhaps, partying hard in Sin City), which of the two players would you more want to witness hoist an individual award of such incalculable distinction? Green, winning the James Norris Memorial, or Ovechkin, repeating as the Hart Memorial recipient?

Which speech would be more poignant? Hilarious?

Mike Green broke an NHL record this season by scoring in eight consecutive games, reached a goal-scoring proficiency on Wednesday night not seen in over fifteen years in the big league, and leads the league in points by backliners with 70, six more than second-place Andrei Markov (who has played in 14 more contests). And he's also not half-bad in his own end either.

Green winning the Norris, in a sense, could bridge the gap between the Capitals teams of the early 1980s, who were lauded for their defensive prowess, and today's team chock-full of high-end offensive firepower. The last time a Caps defenseman won the Norris was in 1983-84, when Rod Langway won the award for the second consecutive season.

It would also be quite a beautiful feather in GM George McPhee's cap. A first round draft pick (2004) was Green, but the 29th pick overall. Could anyone have envisioned that level of success from a single first round draft year (which also brought into the fold, of course, Ovechkin and Jeff Schultz)? Anyone could have drafted Alex first overall. But a Norris Trophy candidate, to be potentially won just five years later, with the #29 selection?

With Green earning the Norris, the Caps would then boast, in the last two seasons, winners of the Hart, the Lester B. Pearson Award, the Maurice "Rocket" Richard Trophy, the Art Ross Trophy, the Jack Adams Award, and a Calder Memorial Trophy finalist. Not to mention having a former Frank J. Selke Trophy winner and former Vezina Trophy winner on the current roster. Whew.

And just imagine how Greenie and Big Dave would celebrate in Vegas. It's a wonderful image.

By the way, I don't need to remind you that Green was left on the 2009 All-Star roster cutting room floor, and that the Caps were not amused. The last time in which the Norris Trophy winner was not on the All-Star Game roster of that same season was in 1998, when Rob Blake won the hardware, about ten years ago. Before that? Chris Chelios, in 1989, nearly ten years before that year. Interesting.

Ovechkin's Hart credentials for this season, like last campaign, are simply unassailable. He's tallied 12 more goals than his nearest competitor (Zach Parise) to date, and scores the most "meaningful goals" in the clutch. His team is on the verge of winning a second-straight division title and bettering its point total from last season by ten points or more.

Acknowledging the definition of a Hart winner ("given to the player judged to be the most valuable to his team") the Hart is popularly considered to be the award granted to the best player in the game today. It's a tremendous source of pride for the organization and the community of fans, knowing that "our guy" has his name (and the team's name) inscribed on that most breathtaking of individual NHL awards. So a repeat commendation places an even more impressive stamp of the Washington Capitals on that trophy.

And this year, the race for the Hart is as charged as ever with raw emotion, with our arch-rival's star center Evgeni Malkin considered the most formidable challenger to wrest the trophy from Alex the Great's deserving hands. Few topics of debate in hockey right now get fans and media alike more charged than Ovechkin vs. Malkin for MVP.