Remember way back when, when Mike Green scored his 30th goal of the season, becoming only the eighth defenseman to ever accomplish the feat? 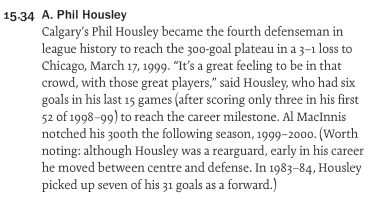 That's right - per "The Big Book of Hockey Trivia," Phil Housley only scored 24 goals as a defenseman in 1983-84. Mike Green is the magnificent seventh NHL defenseman to score thirty goals in a season, not the eighth.