The Season Is A Marathon, Unless You're A Fan

Share All sharing options for: The Season Is A Marathon, Unless You're A Fan 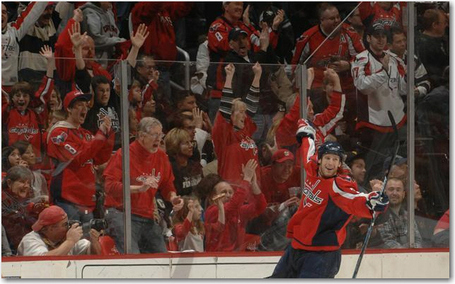 Yeah, you've heard it before:  the season is a marathon.  I know, I've said it myself.  And we're at about mile 18.  The time when most of a long course has been bested, but the finish line is not quite in sight.  And that guy in the fuschia tank top is gaining on you.

The motivation from that beginning jolt of the season, the thrill of getting back to the business of proving themselves individually and as a unit, is long over.  The Capitals have been struggling to maintain that needed motivation, though may have jumpstarted the process yesterday by gutting out a 65 minute tie in an energetic, physical affair.  One that had Joe B. on the Comcast  SportsNet broadcast exclaim, in reference to the volume of the home crowd:  "Welcome to the Stanley Cup Playoffs!"

Of course, the playoffs are still more than a month away.  And that counsels toward a methodical approach to the remainder of the season.

This season, with a commanding but not insurmountable 11-point Southeast Division lead, the Caps have finally had time to survey the league, imagine their playoff seeding and, oh, dream[.  However, . . . t]o be distracted by images of big-picture success, rather than the tight-focus process of playing excellently, is always poison . . . They should stop thinking, pressing, squeezing the sawdust out of the handles of their sticks and muttering the phrase "Stanley Cup." Instead, play hockey. That's hard.

Indeed.  And for the fan, nearly impossible.  Last week, a big stir was made about whether, after such amazing success at home this season, Capitals fans should feel free to boo their claim for achieving so few positive results of late (losing now four in a row at home, if you count a SO loss as a "loss").  Many of you had strong opinions about it.  And that's the very nature of fanatic.  Was yesterday just another game to you?  Just number 67 on the schedule?

We dream of the ultimate prize but also exhibit a short-sightedness, born from the treacherous ground of making a significant emotional investment in a relationship with the team but, at the same time, having no control over its success or failure.

We scream and howl after a win, lament and stew after a loss.  It's part of our identity, and much more than the identity of many players.  Players get traded.  We move away (as I did) and still remain fiercely loyal.  We always wear a Capitals jersey.

Fans love to imagine the big picture, the ultimate goal, every time we buy a ticket.  If we stay "even-keeled" and don't go all-in for each game that we watch, as if it's the most important one on the docket, then most likely we don't bother to buy that ticket, or even watch.  For the players, it should be, in conventional sports psychology, another day at the office.  But for us, its a great reprieve from the office, and we demand a dramatic, inspiring performance.

As much as it might be annoying to the team, or to some in the media, or to ownership, being a knee-jerk reactor is what keeps the turnstiles turning.  The sky is falling after a three game losing streak because we care so deeply.

It goes for assessments of players as well as for individual games.  Jeff Schultz, a former 1st rounder just recently celebrating his 23rd birthday, was already a bust, for some the second-coming of Kevin Hatcher, until he helped shut down the league's top scorer yesterday.  Recently heralded as a breakout winger, Tomas Fleischmann is back to being useless on account of having scored just one goal since February 11, here in Gotham.  The Caps goaltending was teetering on the brink of disaster after a single game, the season opener in Atlanta.  And so on.

But the moment we as fans treat each game, particularly against bitter rivals as showcased yesterday, as "just another day at the office" is the moment we stop supporting the team, at least to any real extent, both with our hearts and our wallets.  Especially for a franchise yet to win the Cup, when the memories of greatness can be passed along to future generations of fans, the joy of reliving them impervious to the current fortunes of the club.  (I'll be telling future generations for as long as I'm alive, and there's an audience, where I was, what I was wearing, and any other minute detail requested, when the Caps won their (first) Stanley Cup.)

So carry on, brothers and sisters.  And cheer on each game like it's your first day of vacation.