Never Fear, The Playoffs Are Near

Share All sharing options for: Never Fear, The Playoffs Are Near 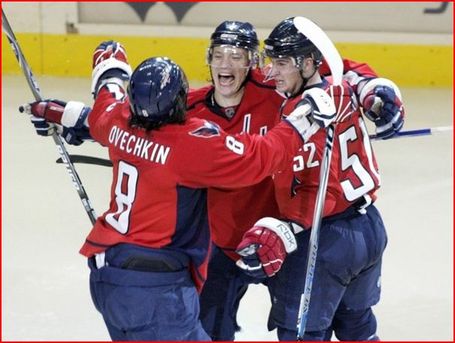 Last night's loss, the latest in a frustrating list of defeats at the hands of "non-playoff teams," sure does raise the anxiety level of Caps country, the faithful long assured of a playoff berth for Les Capitals, but increasingly nervous about the team's performance post April 12th.

Regular season franchise milestones are still within mathematical reach.  Winning six of the remaining seven would eclipse the greatest single-season wins (50) and points (107) totals in Capitals history.  But more important than that, we yearn for that oft-cited momentum heading into the second season.

Thrice Cup champion Sergei Fedorov attempted to calm the nerves on Monday with the voice of experience:

"Odd things can happen, but we're looking at the overall, [and] overall we're on course. Some hiccups will happen along the road - that is just human nature. ... I think we just need to refocus, sharpen our defensive play and we'll be right back in it again."

Not convinced?  Well, let's see how much a predictor of first round success is a team's record in its last ten regular season games.  In the three seasons since the lockout, we set out the aggregate records of first round winners and losers in their last 10 regular season games, as well as the series records of teams that galloped hard to the finish and those that stumbled over the line.

Clearly, no real disparity exists (at least during these last three seasons, and 24 first round series' worth of data) between the records of first round winners and losers.

If anything, the individual L10 records of first round winners during these past three campaigns show that just having a winning record is good enough.  Teams entering the post-season having a L10 record of .500 or worse advanced beyond the first round just 40% (4-10) of the time.  But teams with a > .500 record won the opening series just over 50% (20-38) of the time.

And, as you can see, winning 6 of the last 7 wouldn't guarantee success.  Most teams in the post-season finish up their last 10 with a winning record.  That's why they're in the playoffs.

So the Caps' record so far in the last 10 games is 1-1-1.  Nothing particularly exciting, or encouraging, for the fan.  But whether the team finishes up the season 5-4-1 or 8-1-1 appears to have little relevance to its ability to advance beyond round one.  Dust off that cliché:  The playoffs are a whole new season, and every team that participates is reset to 0-0.  So relax until Game One.

One final obvious note:  As we mentioned yesterday morning, the flu virus is reportedly whipping through the dressing room, sidelining or slowing at least six players to date (whether they play or not).  We should be grateful that this seemingly unavoidable seasonal illness is afflicting the team now and, as a result, it may pass on through in time for the boys to recover well before the beginning of the big spring show.