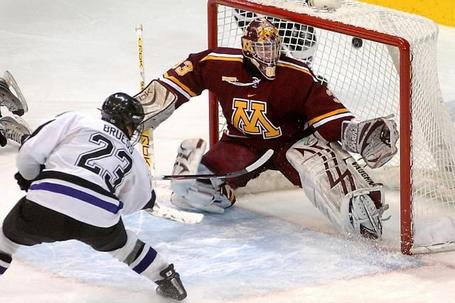 Per the team:  "The Washington Capitals have signed free agent center Trevor Bruess to a two-year entry-level contract beginning in 2009-10, vice president and general manager George McPhee announced today. In keeping with club policy terms of the deal were not disclosed. The Capitals expect Bruess to join the Hershey Bears of the American Hockey League (AHL) next week on an amateur tryout agreement.

"Bruess (pronounced BRISS), 23, has spent the past three seasons with Minnesota State of the Western Collegiate Hockey Association (WCHA). The 6’0", 200-pound Minneapolis native was an assistant captain for the Mavericks in 2008-09. He had 12 goals, 17 points and 117 penalty minutes in 35 games on the season, leading the team in penalty minutes and finishing tied for third in goals.

"Bruess led Minnesota State in points (30) and assists (21) as a sophomore in 2007-08 in 38 games. His nine goals included a team-high three shorthanded goals, one power-play goal and one game-winner. He won the team’s Hardest Worker Award for the second year in a row and led the team in plus/minus rating (+22). In three collegiate seasons Bruess posted 24 goals and 61 points in 110 games.

"Breuss a talented player, but ran into some discipline problems that saw him sit out three games in the second half of the season because of suspension. He definitely developed a reputation with officials around the league, and it's probably best for all parties involved that Bruess moves on and gets a fresh start in a new league."

Update: Here's news of the first incident that got him suspended:

MSU junior center Trevor Bruess will be out for today's nonconference road game against Nebraska-Omaha, serving a one-game suspension for "recent in-game incidents the league feels are detrimental to the game."

Bruess, one of MSU's assistant captains, was handed the suspension Thursday, after discussions between MSU officials and WCHA commissioner Bruce McLeod.

Bruess was called for three penalties last Friday against North Dakota - kneeing, boarding and high sticking - and was involved in a collision Saturday that resulted in UND's Derrick LaPoint's season-ending leg injury. Bruess was not assessed a penalty on the play.

And here's the report on a second incident, less than three weeks later:

For the second time in less than three weeks, Minnesota State men’s hockey player Trevor Bruess is being suspended for rough play

Bruess was given a five-minute major penalty for a knee-to-knee hit during the first period of Saturday’s 4-4 tie with the Huskies and, later in the same period, another two-minute kneeing penalty.

A couple of YouTubes after the jump. Also, be sure to check out WCHB's FanPost for more.