What Would Brand This Season As A Success?

Share All sharing options for: What Would Brand This Season As A Success?

[Ed. note: Our newest writer here at Japers' Rink is one who truly needs no introduction, but we're giving him one anyway because we're just that excited to have him contributing. So please welcome Stephen Pepper, author of the red skate, and dive right into his first fantastic offering.] 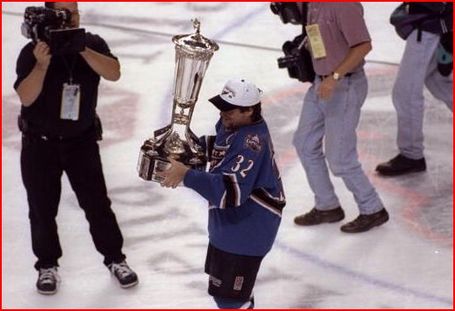 Defining success is often a subjective, personal exercise.  But when the usually rhetorical question of "Can it get any better than this?" is asked of Washington Capitals faithful, the reply has always been, emphatically, in the affirmative.  For all of the engravings of "Washington Capitals" on legendary NHL trophies following last season, that team name is still nowhere to be found on Lord Stanley's Cup.

From one die-hard sports fan to another, dear reader, you don't need me to tell you that following a team with your heart (on your Capitals jersey sleeve) leads to a great many more disappointments than victories.  Fact is that it's a 30-team league, and only one can hoist the chalice each Spring.  So we have to be content with the ebbs and flows of a season, or several seasons, enjoy swimming in the tides and hope for, one day, an afternoon of brilliant sunshine.  (Just a little warmer weather metaphor for y'all in advance of April.)

For far too long the Washington Capitals franchise, certainly its fan base, has endured a paucity of success.  And respect.  The joys of fandom were rooted in watching third-line grinders playing at "110%, 110% of the time" and heading to practice to witness young prospects progress.

But that's all behind us.  The hype machine has now swelled to unprecedented heights, even with Corey at WaTi already proclaiming at season's beginning that "The time is now" and at least one columnist, a heretofore misguided soul, branding Les Capitals a Stanley Cup dark horse.

So would this dark horse achieve "success" this season only by galloping, breathlessly, gritty and salivating, first across the finish line?  Or would an initial strong bolt out of the playoff gate, but a stumble down the stretch, be enough to whet your cheering whistle for next season?

Being a fan is largely a passive enterprise.  We collect ticket stubs, jerseys and hockey cards, write blogs, or express our devotion to team by creating art from various media.  But mostly, we watch and enjoy.

And like compelling live theatre, this current cast of Capitals, for nearly the past 12 months, has performed with such electricity and flair to rival a star-studded Broadway performance.  (Ok, your mileage may vary.)  Worth the price of admission, most nights?  Check.

Granted, a commitment to perform their roles as flawlessly as possible on every game night might yet need some improvement, but this team certainly has brought us much more joy than disappointment these days.

In speaking to Steinz over at the Bog, Uncle Ted, while keeping his eyes on the prize and flatly stating that "we can win a Cup," also mentioned a very simple, but fascinating, metric for measuring fan satisfaction with the team, and the extent to which the team is meeting their expectations:

For sure.  Do the math for your relationship your wife, partner, parents, dog -- see what you come up with.  (Better yet, let's stick to hockey.)

Certainly entertainment value has to be included in a discussion of a successful season, does it not?  The team is tremendously thrilling to watch, moreso I submit (without much controversy) than any Capitals team in franchise history.  Performances, particularly by Ovechkin, but also of the other "young guns," have been magical, revelatory, inspiring.  Community building.  (Just look at how many folks make sharp and thoughtful comments on this site.)

So with all of that, and with so many red-rocking fans packing the house and making their voices hoarse, has success already been achieved?

Well, no.  Focusing on game-to-game, hour-to-hour satisfaction may tell of a zen-like approach to sports watching, but would lead to the conclusion that any season with more wins than losses is a "success."  Clearly that's not a unique, or lasting accomplishment.  And more to the point, much of those smiles and cheers and raw energy in the Centre Verizón these days derive from a palpable excitement over what the team can achieve past April 12.  How much that anticipation is a part of today's happiness watching the team?

And so, the Leonsis era has yet to see a single playoff series victory, which drought ultimately extends to the beginning of the 1998-99 season.  Ten years is an awfully long time.  And a lot of moments in between best left forgotten.

And many in hindsight, despite all the hours of "smiling and pleasure" richly experienced along the way, the many toasts to the team, buzzed songs of joy, moments of intense pride felt wearing Caps red, would see all those memories soured by an early playoff exit.

In 1999-00, the Caps surged in the second half of the season, going 27-6-6 after Christmas, and lost only seven games all season at home, to capture the Southeast Division, with a 44-26-12 record.  Olie Kolzig won the Vezina Trophy, and a guy named Chris Simon scored 29 goals.  Then the playoffs came 'round, starting with a 7-0 loss at home to the Penguins and ending with a 4-1 series loss to the hated rivals.  And suddenly all of that incredible home happiness meant very little.

In a unique way, we've seen the corps of this team, not to mention much of its supporting cast, develop from fresh-faced kids on the draft day podium into solid, if not fantastic, NHL regulars.  And we see the potential for at least one Cup victory.

So, almost like a parent which such high expectations for her precocious child, we're beginning to demand ultimate success.  A recent weekend sweep in Florida involving an NHL record-setting performance is blunted by a flop at home against a team "we should beat."  Trade chatter is no longer about restocking the prospect pantry, or getting into the post-season.  It's about winning that fourth-round series.  The regular season doesn't matter anymore.  Or does it?

When I attended the NHL Awards Show last June, and witnessed Ovi haul in a four-pack of history and Gabby humbly accept the greatest coaching honor in the hockey world, basking in the glow of accolades at the after-party, I was so thrilled to call myself a Capitals fan.  Sure, Mike Babcock received a lot of congratulatory handshakes, but there was a definite buzz around the Caps.  Ted held court with the Toronto media, eager to report on the franchise "building it the right way," and everyone wanted to chat up a star-struck Bruce.  The team has arrived, and a first-round playoff exit didn't diminish the profound success that was the 2007-08 season.

So what defines success this season?  Beyond the ticket sales and new local media attention --

Is another individual trophy haul enough -- Ovi repeating at Hart winner, Green capturing the Norris trophy, restoring and at the same time, redefining, the franchise tradition of defensive stalwarts?

Forget the Southeast:  finishing ahead of all of the old Patrick Division rivals?  Or winning the Eastern Conference?

Winning at least a single playoff round, to break the drought?

Or only by winning the Cup, and watching AO do something outrageously joyful like toss the 40lb trophy into the air, twirling around on his skates and catching it on re-entry?

My view:  Eastern Conference champions.  After taking in Saturday's game, and noting the record against the other top two teams in the East (3-0-1[an OT loss] vs. Boston, and 2-0-2 [both SO losses] vs. NJD), we can hang with the best of the conference.  That suggests that winning a seven-game series against either club is certainly within reach.  (Now a repeat date with the Flyers is, perhaps, a thorny matter, for another post.)

A Conference title would go a long way toward continuing a winning momentum in the organization, and with the die-hard fan community, as well as with the media (mostly WaPo) and those fans that have recently come on-board.   And establish a more lasting memory of team accomplishment to overlay the individual jaw-dropping exploits so far this campaign.

But make no mistake, Caps brothers and sisters, as much as I've enjoyed this season to date, I want to feel that transcendent euphoria experienced by that ultimate prize.  And no matter how you define success, there will be no way to rationalize away all traces of disappointment if it's not earned this spring.

Just as GM George McPhee has likely been waiting, and building, his whole post-playing career life for this moment, supporters of the Capitals have been waiting their whole fan-lives for what, in this season of hope, we long to witness during these next three and a half months.

Fortunately, though, our window of opportunity is a bit longer than that.