For Those Defensemen About To Shoot, We Salute You

Share All sharing options for: For Those Defensemen About To Shoot, We Salute You 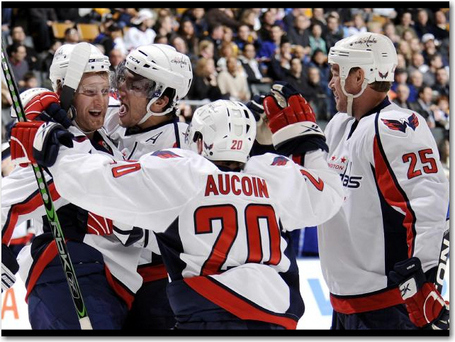 This one's for all of those fans who, watching defensemen walk the line, looking to dish, yell "Shoot the puck!"

Fans and coaches alike have, since the beginning of the season, encouraged backliners like Milan Jurcina to blast a few more shots on net.

As Juice himself said back in October:

I am supposed to be defensive defenseman, so I don't really think much offense. But if there is decent chance there to shoot the puck, why not?

Aside from Mike Green (and perhaps to a lesser extent, Tom Poti), every other Capitals defenseman thinks defense first.  That's accepted, and most often necessary:  move the puck quickly around in the D-zone, get it up ice, and let the substantial forward talent on this season's Caps team work their brilliant designs on the other net.

But what I set out to do here was create some measure of how much offensive pressure that defensemen other than Green apply on a game-by-game basis, at even-strength, and see if the results confirm what we would logically predict:  when those defensemen are more offensively aggressive, pushing the play, sending more rubber toward the net, the team is more successful.

So I added up the total SOG + total A/B + total MS credited to all of the Caps defensemen not wearing #52 in a single game, to create an aggregate number of attempts on the net in that game ("ATT/G") by the rest of the D corps.  Even attempts that miss the net or get blocked can result in strange caroms and might keep the pressure high in the offensive end more often than not.

Why take Green out of it?  He's more or less a constant:  one of the Big Four upon which this squad can, and must, rely on a nightly basis.

And only eight of his 25 goals on the season have come at ES.  I wanted to isolate ES play, especially since the effectiveness of the team's PP, at 24.6% and 2nd in the league, leaves far less room for improvement.  Taking the one D who spends the most time patrolling a PP point position, almost to the exclusion of all other Caps defensemen, was the simplest way to do that.  (Plus, event summaries do not separate out these ATT/G at ES from those occurring while on the PP.)

Here's a breakdown of average ATT/G by month, along with the team's record:

What first struck me was that the team's highest ATT/G figure occurred during its most successful month to date (December).  You'll recall that, in that month, the torrential injury storm that sidelined blue line stalwarts like Green and Poti and Jeff Schultz necessitated lengthy stints by call-ups Sean Collins, Bryan Helmer, and Tyler Sloan.  Guys that, perhaps, were eager to be a little more aggressive and impress the coaching staff with their ability to play in both ends of the ice.

Looking at the season as a whole, the Caps other D average 10.6 ATT/G in wins, and just 9.4 ATT/G in losses.  Pretty significant difference.

And when one of those other D-men manage to pot one, the results are extraordinary:  an 11-1 record (the lone loss coming in San Jose, that 7-2 beat down).  The kind of secondary scoring that seems to automatically guarantee a victory.  The average ATT/G in those 12 contests is, well, 12.  The average ATT/G in all other 60 games is 10.

So the more ATT/G are generated, the more likely it appears that one of those other D will score, and that the Caps earn another W.

One more final note:  Add in Brian Pothier on a consistent basis, and we could really see some offensive pressure from the blue line at ES from a second pairing (i.e., when Green's not on the ice).  Potsy finished second in shots per game during his roughly half a 2007-08 campaign, and was first in that department in the 2006-07 season.