Pothier: The Solution From Within

Share All sharing options for: Pothier: The Solution From Within 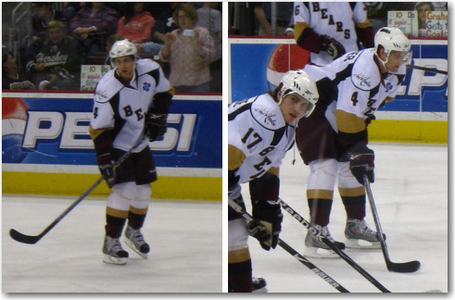 Could "the long road back" be, finally, leading back into Caps' country for Brian Pothier?  Sent on a conditioning assignment to Hershey on the afternoon immediately following the trading deadline, he's now played in his third consecutive game for the Bears, without incident and apparently with much improvement each time out.  Teammate and understudy Karl Alzner recently said of Pothier's play:

"He was good - for his first game back. In the second game, you could just tell he was just that much better than pretty much everybody out there. It doesn't seem like it's gonna be that hard of a transition for him."

In that scant sample size of three American league games, he's scored no points, is even in +/-, and has all three of his SOG to date, and his first minor penalty, in last night's game, a 3-2 loss to Springfield.  He's been paired in those games with recent waiver acquisition Staffan Kronwall.

Most observers of these Caps harboring Cup aspirations for the team would have loved an upgrade on defense at the trading deadline -- a steady, veteran presence.  Hardened, determined.    We could think of no more fitting solution than 31-year old Pothier, who has certainly been through hell and (almost) back.

GM George McPhee admitted that a possible return of Brian Pothier was one reason front of mind for passing on the addition, and perhaps slipping under the salary cap without significant, or any, loss to the active roster, a depth defenseman like Jordan Leopold, Niclas Havelid, or even Derek Morris.  Not to mention orchestrating a major future-mortgaging coup like Chris Pronger.  Potsy looked then, and looks now, like a legitimate, not-too-far fetched Plan B.  McPhee's BATNA, if you will.

The fact that Potsy was sent to Chocolate Town on that non-eventful March 4th afternoon suggests that he was ready to begin professional play for some time before that day, and that McPhee and Assistant GM Don Fishman simply waited until the trading day dust had settled, and the salary cap picture for the duration of the regular season became clear.

The most difficult aspect of a comeback from a concussion has got to be, not the length of time absent from the game (Pothier was sidelined from active game play for 14 months), but regaining confidence in one's body.  That his health rests on a solid foundation of full recovery.

Stephen Whyno of WaTi spoke to Pothier after his second Bears contest:

"The first game, it definitely took a little bit to get the rust off. But I was really happy with the way the game developed. I didn't play too much, and the coaches put me in good situations to try to feel the puck and feel comfortable. The second game was a hundred times better."

"The thing is, once I got hit, once I got in some confrontations, it was a huge difference. The second game [the concussion] wasn't really in my mind. I went back to get pucks and put myself in some situations that I could've got hit for sure. The more I play the more comfortable I get."

Not a bad first big hit to absorb as a test case, eh?  While the speed of the AHL game is quite removed from the flash and dash of many of the NHL's offensive talents, the hitting and physical rigors are likely quite similar.  For an eyewitness account of Potsy's current level of speed in skating and decision-making, check out reader gotsparkly's FanPost from this morning.

It's been an awfully long time since we've seen Pothier skate, so let's review his creds:

Potsy skated an average of almost 24 minutes a night during his first campaign with the Caps in 2006-07.  As part of a current D corps significantly upgraded and matured than the one from that rebuilding season, he'd be called upon to contribute far less TOI/G than that drudgery.  Quality over quantity.

Before his most recent concussion injury, he played in 38 games during the 2007-08 season and, in that time, had the fourth-most even strength TOI/60 (behind Shaone Morrisonn, Tom Poti, and Mike Green) and maintained the fewest GA/60 (2.09), again at ES, of any regular (excluding a 7 game stint by Sami Lepisto), by far.  For Corsi rating fans, he was 3rd best amongst Caps D in that stat, and was also +4 at ES.  And let's not forget that roughly half of his 2007-08 season's work occurred during the woeful, Glen Hanlon-led portion of the campaign.

Now, with this season's current blue line corps, he wouldn't factor significantly into special teams (he saw less duty per game on the PK in 2007-08 than all of Milan Jurcina, John Erskine, Jeff Schultz, Morrisonn, and Poti), but it's the quality minutes at even strength that we're after, anyway.

Pothier could get a callup as soon as this weekend.  If so, where does he fit in the D pairings?

At least to start, we'd likely see the following set out by Gabby with #2 in the lineup:

That would give him manageable third-pair duties, as well as some familiarity.  Pothier skated with Erskine third-most often at ES among all Caps' D in 2007-08 (behind Poti and Schultz, who likely wouldn't be separated just on account of Pothier's return).

While Chris Clark's and Brent Johnson's LTIR status collectively free up about $3.446 million of cap space, Karl Alzner's $1.675 million total cap hit, plus Pothier's $2.5 million per, totals $4.175 million.  Add to that the estimated modest hit by Michal Neuvirth's $850,000 salary, filling in for the injured Johnson, and that leaves Alzner as the odd man out in Washington.