How Much Secondary Scoring Do The Caps Need?

Share All sharing options for: How Much Secondary Scoring Do The Caps Need? 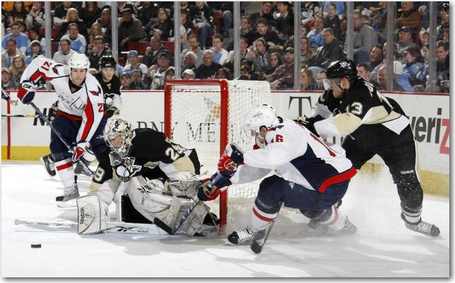 The hew and cry over the Capitals' lack of secondary scoring is persistent and largely deserved. As dominating as they can be, top forwards like Messrs. Ovechkin and Semin aren't each going to score in every game. So it's all of those "other guys" stepping up, when the stars are stymied, that earns tough wins, and makes fans dream of a 50 win season.

In losses, then, the Big Four's goal production drops off 42%, but the rest of the team's production drops 54%. Ideally, the latter should be the smaller percentage, given that 14 other skaters on a given night fall into the "other" category. And interestingly, in the games in which the others don't score at all, the Caps are 4-9 (including three games where the team was shut out entirely).

Here's something else to chew on this afternoon: The two Alexes have accounted for 15 of the 38 GWGs this season. Tomas Fleischmann has four (good for him). But no one else has more than two, including names like Sergei Fedorov (who just earned his second last night) and Viktor Kozlov (zero).

The Detroit Red Wings have six players with at least three game winners this season. The San Jose Sharks have five such players, as do the New Jersey Devils. So there's your benchmark.

But just how much secondary scoring does a Stanley Cup Champion need?

Surveying the last five Cup winners, here's how point and goal production was distributed during the relevant regular season:

The current Caps would seem to match up exactly with Detroit's distribution from last year, especially if those "projected" guys shake off the recent home malaise. Surprising?

The disparity between Detroit's GA/G and the Caps' figure provides a sobering counterpoint. As the Caps sit 6th best in the league in 5-5 F/A, that disparity owes much to the Caps committing the 4th most minor penalties, and its 22nd ranked PK% -- subjects already discussed at length here.

Still, while the lack of secondary scoring has been a recent issue at home, the Big Four have been meeting or exceeding expectations nearly all season long. Green has already exceeded his season-best points total in this campaign, not to mention earning that NHL record for scoring in eight consecutive games. Nicky has also already bested his rookie point total (with 71 points to date), and is on the cusp of a 20 goal year. Ovechkin is capable of cracking the 60 goal mark again. And Semin is on a pace for 107 pts and 48 goals over 82 games, and 40+ goals are still within reach for him this season (a feat not yet achieved in his young career), based on his torrid pace these days.

And it's a rare and special season all on its own when all of a team's star players are performing at their full potential.