Are You Sure About That, Mr. Carcillo?

Share All sharing options for: Are You Sure About That, Mr. Carcillo?

When explaining why he sucker-punched Matt Bradley late in the first period of tonight's 8-2 Caps win, Dan Carcillo offered up the following:

“He kind of came at me the shift before. He was talking to me before. I thought we were going to fight."

Huh. That explains it, then - Bradley came at him the shift before. But if Bradley did indeed come at him, it must've been pretty quick, since the two had only been on the ice together for one second prior to the shift on which Carcillo clocked Brads (and that one second wasn't at a stoppage in play, either). Take a look:

Carcillo also said of the incident:

“Everything happened pretty quick, I saw him drop his gloves, so I started punching him." (Emphasis added.)

The facts beg to differ: 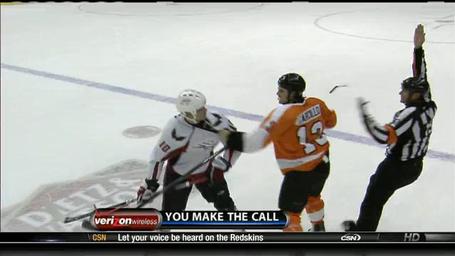 So the question is, as Corey Masisak asks it: "If Carcillo is that unrepentant and inaccurate/lying during his review, is the NHL going to be more willing to suspend him/add games to it?" I guess we'll see.