Share All sharing options for: Alex Ovechkin and the Caps' Power Play Problems

"Our power play was horrible." - Bruce Boudreau after his extra man unit went 0-for-4 with just one shot on goal in 7:47 of power play time Friday night in Vancouver

But Ovechkin seems to be struggling a bit on the power play this season, with just six power play tallies in 28 games and a matching number of assists. A season ago, Ovechkin scored at a .58 power play points-per-game pace; this year he's down to .43.

To be sure, the Caps extra man unit keeps humming along, and is still fourth-best in the NHL despite going 0-for-8 over the weekend. But here's where it gets interesting: the power play is firing at a ridiculous 40.6% success rate in games Ovechkin didn't play and at just 17.9% when he's dressed. For those of you who are more visual learners, here's what that looks like graphically, with the darkened sections representing games Ovechkin has missed: 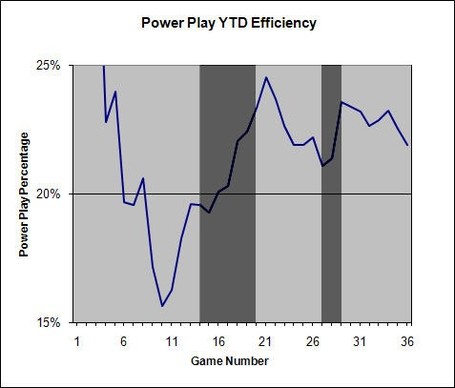 It's easy to theorize and explain away the six- and two-game hot streaks that occurred in Ovechkin's absence from the lineup (the team stepped up, they saw some pretty poor opponents, the sample size is small, they were less predictable, etc.), and it would be a tremendous stretch to say that the Caps' are better off without Ovechkin when they've got a man (or two) advantage. But the more troubling fact is that with Alex Ovechkin in the lineup, the Caps' power play has been average... and with the amount of talent it has, average isn't close to good enough.