Let's have a nice Rink welcome for young Marcus "Mackan" Johansson, the impressive Swedish center who was the Caps' first round selection (24th overall) in the 2009 NHL entry draft:

Mackan is really well spoken. And a better interview than Nicky. 'Course we don't keep Nicky around just to chat:

But why did we draft him? Well, here are some (most likely incomplete) stats.

And you know, stats are a bit dry. Let's take a look at his game. He's been spending his time "down on the gård", playing for Farjestad BK in the SEL

Here he is from about a week ago with a beautiful assist and then a nifty goal against Modo:

This is some older footage from a world juniors tournament, Tre Kronor v. Big Red. I don't speak Swedish, but the announcers definitely have a "Do you believe in miracles?" moment.

And finally, Mackan was most recently in Ottawa with Team Sweden Under-20s. Recently as in this past Tuesday, November 3rd. They are playing a series of exhibitions against Canadian teams to get used to the NHL-size ice rinks. This game was against the Carleton (University) Ravens, and that would be Mr. Johansson at centre ice, wearing #11 and the captain's "C". (Tre Kronor 5, Ravens 1) 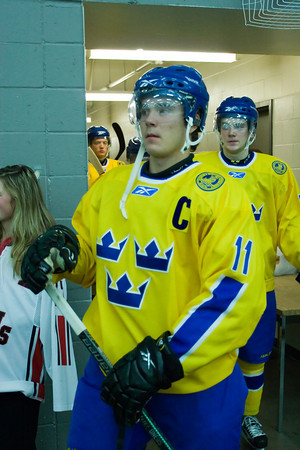 For some reason there's no sound until the end of the anthems, and the play-by-play guy is kind of annoying.

Farhan Devji got some quotes after the match.