For the briefest of moments in early 1992, televisions in the US were tuned in to the Winter Olympics in Alberville, France. Bonnie Blair and Kristi Yamaguchi were on their way to winning gold medals for Team USA. And a little known, journeyman minor league goaltender named Ray LeBlanc was backstopping US Olympic hockey team to a 4th place finish. To quote his Wikipedia page: "At the 1992 Winter Olympics, LeBlanc appeared in all eight games for the United States, compiling a record of 5–2–1 with two shutouts. The Americans finished out of the medals, however, as they lost 6–1 to Czechoslovakia in the bronze medal game." This US team wasn't supposed to make the medal round. They were bad. Ray stole 4th place for them. As a reward, the Chicago Blackhawks put him in for one game later that season.

Later that spring, at a community card show, I happened across a booth selling hockey cards. Sitting there, for a whopping $3 was a 1990-91 Fort Wayne Komets IHL team set. The sticker on the box cover said "With 1992 US Olympic Hero Ray LeBlanc!" I stupidly bought the box. I was 13 years old, without a clue. LeBlanc played 1 NHL game and his 15 minutes of fame only lasted 8. The set quickly went into a box with all my other cards. It sat there. 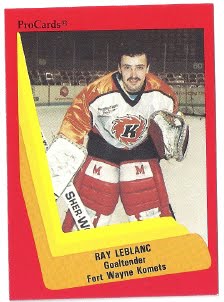 Then, something strange happened. A few years ago, another journeyman minor leaguer-turned coach made the jump to the NHL. In his first season as an NHL coach, he led his team to the playoffs and won the Jack Adams award as coach of the year. Fans of his team became rabid and his stature continued to grow. He's now an icon in the area; a regular guy who made it and who everyone loves. People he's never met call him by his nickname, Gabby. Coincidentally, when he wrote a book about his life, he chose his nickname as the title.

That man is Bruce Boudreau.

About a week ago, I was deep into reading that autobiography when I came across the chapter in which Bruce describes his final few minor league playing seasons. He talked about playing with his best friend, John Anderson, who is now the head coach of the Atlanta Thrashers. He talked about his last seasons in Fort Wayne, playing for the Komets.

Where do I know that team from?

I raced downstairs to the garage where my box old box of hockey cards sits, gathering dust. I rifled through the older cards and found that old Fort Wayne team set. Ray LeBlanc's card sat at the front of the stack. I quickly shuffled through the cards until I stopped at the two cards I was looking for. John Anderson... 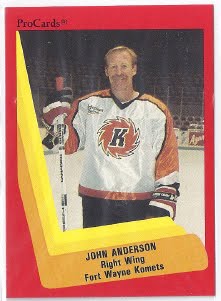 and our own, Bruce 'Gabby' Boudreau. 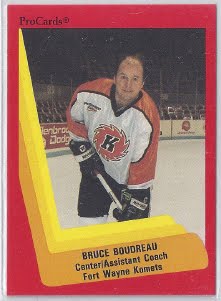 I no longer collect cards. Sure, I'll buy the odd pack every now and then but I miss the days of bubblegum and cardboard-colored cards. I love my old cards: Bobby Orr, Cam Neely, Ken Dryden. But every so often, I'll find a reason to go digging into the big old box of cards and find a treasure.

Bruce never mentions poor Ray LeBlanc in his memoirs. I wonder if he even remembers him. He retired in 2000 with a career NHL record of 1-0-0, 1.00 GAA, .955 Save%. But if it wasn't for Ray LeBlanc, I wouldn't have these awesome Bruce Boudreau and John Anderson cards.