There's no way that after a season like few defensemen have ever had that the Canadian Olympic team wouldn't include one of the fastest, slickest, and most offensive (wait, that came out wrong) player on their roster, Mike Green of your Washington Capitals... would they?

I mean it seems beyond improbable that a Norris trophy finalist isn't good enough to play on your Olympic team, but here we are.

And thus in honor of the possibility that Greener watches the Olympics the same way we all are going to (in a futon eating Funions and drinking Mountain Dew), I am going to leak the never before seen hockey card that was pulled at the last second! 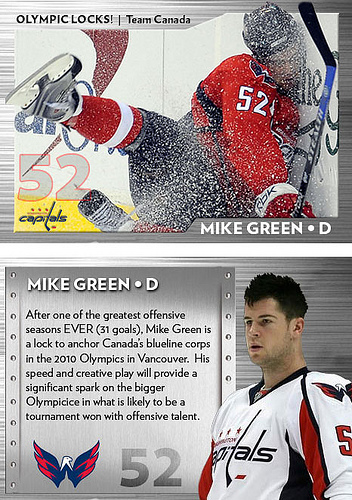 You can thank F&B for this mess.