Why There's a Book on Semyon Varlamov

Share All sharing options for: Why There's a Book on Semyon Varlamov

Semyon Varlamov is hot. In his last seven appearances, last spring's overnight sensation has a a 6-1-0 record, 2.09 goals against average and a .928 save percentage. Perhaps most importantly, he has seemingly overcome the troubles that plagued him early on this fall - he's given up more than two goals in a period just once during this streak and has, for the most part, avoided letting a single goal against open the proverbial flood gates.

And yet the book on Varly remains the same: go high glove. In fact, he's been beaten there a couple of times in his last three outings. After the jump we're going to take a closer look at these goals to get a better understanding of just why savvy shooters are picking that spot to snipe.

Nice shot. But let's slow things down a bit (via YouTube). As Bergfors winds up, Varlamov is in good position - square with his glove high: 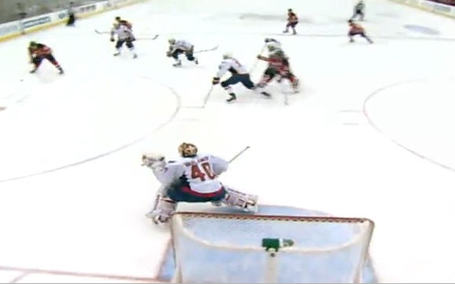 But as the shot is released and Varly drops into his butterfly, he drops his glove: 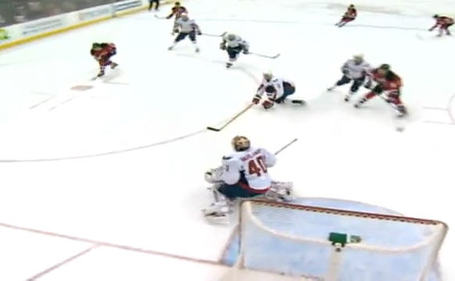 Trent Hunter's power-play rocket tied the game at four with just over two minutes left in regulation. Varly never had a chance. But could he have?

Again, via YouTube, we see Varly readying for the shot as he did for Bergfors' blast - with his glove high: 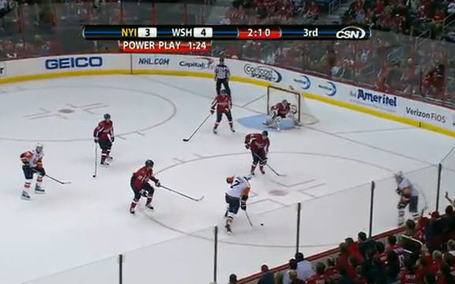 But, just as on the Bergfors tally, as he drops into his butterfly, he drops his glove: 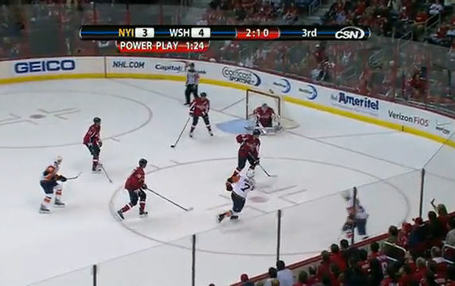 The shot goes upstairs and the game goes to overtime.

These two goals demonstrate that when pucks are flying at nearly 100 miles per hour, the extra movement of having to raise one's glove back to the position it was in a fraction of a second prior can be the difference between a save and a goal. The goalie who minimizes his movement here probably minimizes his goals against average as well.

This isn't to say that Varlamov hasn't made highlight-worthy glove saves - he has. And his recent record and numbers would seem to indicate that if there is indeed a book on him, perhaps not everyone's reading it.

But these are just two examples of a fixable technical problem in his game. The good news is that one would think it's correctable. Time to coach him up, Archie.