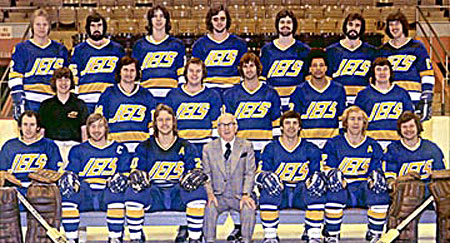 Bruce Boudreau (middle row, third from left) in his salad days as a centerman for the Johnstown Jets and day player for the Hyannisport Presidents, via misterirrelevant.com

Gabby: Confessions of a Hockey Lifer

So I went to Kettler Capitals Iceplex* and met Bruce and Tim today. Well, "met" is too strong perhaps, but they did both sign my book, and we chatted about the Philly-centric hoodie I was wearing (Eastern State Penitentiary and if you haven't toured it yet, you should.)

Read 1/3 of the book while waiting on line, 1/3 on the train ride home, and finished it earlier this evening.

Still internalizing it. Gabby has burned a few bridges for sure. Then gone back, scooped up all the ashes, and tied a rock to them and sank them in the deepest part of Lake Ontario.

But he truly loves him some Greener.

And it is entirely possible that he is secretly married to Tomas Fleischmann.

This book is highly recommended for all the regulars here at Japers'. I really felt like I was reading about old friends. The whole gang from Hershey, and so many of the rising stars from all over today's NHL.

We learn of the ups and many, many downs of a "hockey lifer", told with brutal honesty. Bruce brings us along as he plays and coaches with the men who are now coming at last into their own and rising with him into the ranks of major league coaches and executives.

And now the sons of those men are working on their own careers as their fathers before them, ping-ponging from major juniors to AHL to NHL and back, making their career decisions (both good and bad) along the way. They would be well-advised to pick up a copy of Coach Boudreau's book before that next long bus ride to Ft. Wayne or Kitchener.

* I know there was at least one other Rink Rat there today. We really need to develop some gang code to flash at these things so we can say "hey".