On the Scoresheet, Gary Bettman is Six-Foot-Three

Share All sharing options for: On the Scoresheet, Gary Bettman is Six-Foot-Three

As pretty as his pre-season tally against the Rangers last Sunday was, Brooks Laich's two goals in last night's win over the Bruins were in some ways more beautiful to watch because they demonstrated the type of "net presence" of which Laich is capable and has demonstrated in the past. As he noted post-game in Boston, "With Alex [Ovechkin], you know the puck is going to get to the net - somehow it is getting to the net. I know what my role is on the power play. I think my two goals might have been from a combined two feet out from the goal line."

For you more visual types, here's a look at each of the two goals from just about the moment the puck leaves Laich's stick: 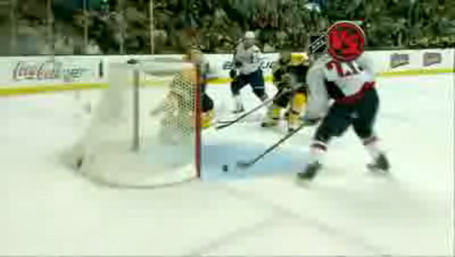 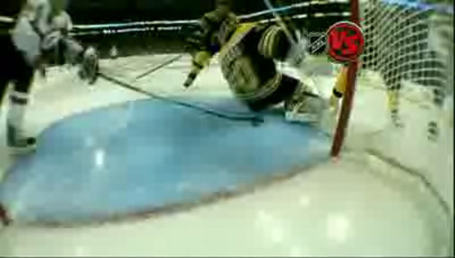 Beauties, both of 'em.

But that "combined two feet" comment got us wondering - from just how far out were those goals, actually? Would you believe 14 and 12 feet? Me neither. But that's what the NHL's official play-by-play sheet says (ESPN.com has them at 14.6 and 10 feet, respectively). As a point of reference (if my Pythagorean Theorem skills are still sharp), the faceoff dots are approximately 28.6 feet from the center of the goal at the goal line. So Laich's first goal was scored from about half-way to the dot (more than two Zdeno Charas in distance), and his second from more than a third of the way. Huh?

Does it matter? Of course not. Do I have issues if things like this bother me? Likely. But I suppose the point is that even presumably objective stats can be, well, wrong when the data collected takes place in the blink of an eye in such a chaotic, lightning-fast game.

[For more on this topic, click over to the brilliant Behind the Net, which, if you didn't know, is now on the SB Nation network. Awesome.]