The January, 2009 issue of lad mag Maxim features Mike Comrie's girlfriend, Hillary Duff, on the cover (sidenote: who's more overrated - Comrie or his lady?), but of moderate interest to us is a two page feature on Alex Ovechkin, the "greatest hockey player on the planet."

While it's good to see that Maxim magazine has more hockey sense than Maxim Afinogenov (zing!), the article itself ranges from the generic Ovi talking points (apparently he's not like stereotypical Russian pucksters in that he likes to hit people) to blatant pandering to the magazine's target demographics (Alex likes blondes, driving fast and dip... yawn) with a handful of cherry-picked quotes that make AO and his business agent, Konstantin Selinevich sound like Russian mobsters straight out of We Own The Night.

Then again, I don't think too many mafiosos would offer up this quote: 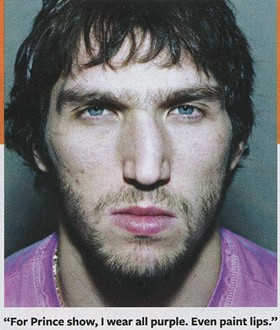