A Normal Night By No Stretch Of The Imagination

Share All sharing options for: A Normal Night By No Stretch Of The Imagination

Earlier this evening, the hockey world got the surprising news that Caps website producer Brett "Stretch" Leonhardt would start tonight's game as Brent Johnson's back up. Here's a roundup of some of the coverage the move has received so far:

"Today wasn’t the first day that we came to the rink thinking there was a real good chance that Stretch might suit up, and maybe it won’t be the last. But it’s a helluva story any way you slice it." - Dump n' Chase

"So thank you, Brett Leonhardt. Thank you, because today you've reminded us all that anything is possible." - D.C. Sports Bog 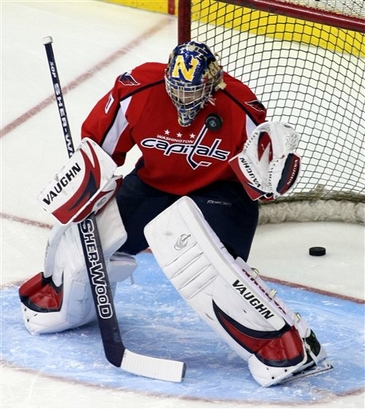 "Obviously, this is one of the more unique developments in recent memory for this team, and it is going to make a great story to tell his grandkids." - In The Room

"His name is Brett Leonhardt and he's a web producer. He cuts and produces all of the videos on the team's site. He's from Ontario, played some junior hockey and also played at Neumann College in Philly. He's about 6-7 and wears NHL style pads, so people often mistake him for a Caps goalie." - Washington Post web chat 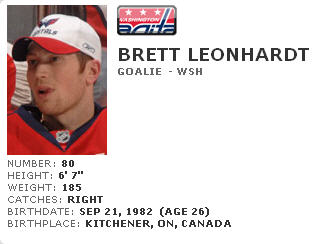 "Nervous, Caps fans?  Get a load of this mugshot here, and rest assured that no matter what happens, the team will be OK tonight in net." - The Red Skate

"A once-in-a-lifetime chance, which occured because there was no chance of Hershey getting Simeon Varlamov to D.C. in time for the game. We were in Gonzales, Texas when the call came in to Bob Woods on the bus, which is for our purposes the absolute middle of nowhere. Just far enough out of San Antonio that we couldn't go back, and still a full two hours from Houston. By the time the Bears staff got Varly to Bush Intercontinental Airport, the first flight he could make left at 4:00 p.m eastern time." - John Walton Hockey

"During the first half of the first period, he sat at the end of the bench in a white baseball cap. He looked down sheepishly when shown he was shown on the huge replay screen along with the caption: '1st NHL game.' The crowd roared." - AP

"I hope they make a movie of this..." - The Peerless Prognosticator

"Metropolis may have Clark Kent but Washington had Brett Leonhardt. For half a period at least." - Deadspin

"Brett Leonhart [sic] realized a dream last night - he was a National Hockey League goaltender for about an hour." - Montreal Gazette