With four games this past week (that now constitute just under a quarter of the season to date), there was plenty of opportunity for a shake-up in the Caps Corsi Rating rankings. Let's take a look at the week what was, but first, here's the year-to-date Corsi Rating for each skater on the team on a per game, per sixty minutes of even strength ice time rate (click to enlarge): 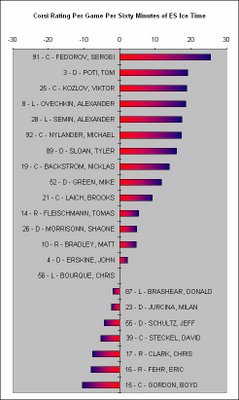 The first thing you'll notice in comparing this week's chart to last week's is that there are three new names on the negative side of the ledger, as we welcome Chris Clark (who had the team's worst CR in three of the four games this week), David Steckel (the team's worst in the fourth game) and Milan Jurcina into the red. That trio, at minus-32, minus-18 and minus-10, respectively, were the worst Caps in terms of raw Corsi Ratings for the week, and, considering that other than Juice those aren't big even-strength minutes guys, that's troubling (and how they ended up taking the dive they did on this chart). John Erskine (minus-five) and Jeff Schultz (minus-three) round out the bottom five for the week.

On the positive side of things, a red-hot top line led the way, as Alex Ovechkin (plus-36) and Nicklas Backstrom (plus-28) posted big numbers, with Tom Poti (plus-24), Viktor Kozlov (plus-23) and Mike Green (plus-19) right behind them (Alex Semin at plus-17 in just three games and Tyler Sloan at plus-16 also deserve mention).

What you can see here is that the Caps are becoming very much a one-line team at even strength - as good as Tomas Fleischmann has been in the offensive zone, his plus/minus and CR show a weakness at the other end of the ice, and the other lines are treading water at best. And yet the Caps now have the fourth-best five-on-five GF/GA ratio in the League, thanks to the two Alexes sitting in the top two spots in the League in even strength points. What that tells us is that the goaltending has been very good at five aside lately and has masked some of these deficiencies (sure enough, the Caps' even strength save percentage has climbed to 13th in the League after being 29th just two weeks ago).

So what's the answer? Besides the need for the entire team to commit to playing a bit more defense at even strength, perhaps splitting up the Alexes, with Kozlov rejoining the top line and a Flash-Michael Nylander-Semin second line would help in that the team would ostensibly have two lines capable of creating chances and possessing the puck in the offensive zone. After all, the best defense is a good offense, no?

One final note - there's been some criticism of the use of Corsi in evaluating player and team performance, to which I'd say that if you don't think that even strength production is important, think again. And again. The Caps are now 7-2-1 when outshooting opponents at even strength, 2-2-2 when outshot at even strength, and 1-0-0 when the shots are even. Even strength chances matter, as do the guys who are - and aren't - producing them.