The Caps played three tight games this week and managed to snag five points along the way - we'll certainly take that. Let's take a look at the week what was in Corsi, but first, here's the year-to-date Corsi Rating for each skater on the team on a per game, per sixty minutes of even strength ice time rate (click to enlarge): 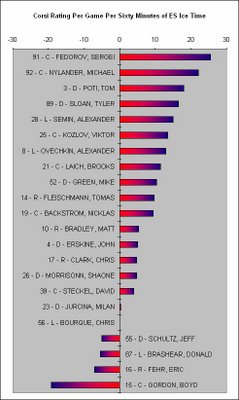 Still no change at the top or bottom from last week, with Sergei Fedorov and Boyd Gordon at the extremes for a fourth consecutive week, but thanks to a horrible showing against Ottawa on Tuesday, Donald Brashear has joined the trio of Caps previously on the wrong side of zero (it should be noted, however, that in the two subsequent games, the Brashear-Gordon-Matt Bradley fourth line has the same raw CR as the Alex Ovechkin-Nicklas Backstrom/Sergei Fedorov-Alex Semin line in this metric, and has done so in significantly less even strength ice time).

In terms of raw numbers, the Caps best player, by far, was Tom Poti at plus-17. In fact, since returning from injury, Poti has led the Caps in this stat in three of the four games and has been positive in each game - it goes without saying that a healthy Poti is absolutely critical to the Caps success right now. Shaone Morrisonn (plus-seven in limited action), Nicklas Backstrom and Tyler Sloan (plus-six apiece, and in just one game for Sloan), and Brooks Laich and Viktor Kozlov (plus-five apiece) round out the top five.

Chris Clark's was the worst skater on the team at minus-12 (in just two games) for the week, but we can blame his *ahem* injury, right? A quartet of players at minus-11 completes the bottom five and consists of Jeff Schultz, Milan Jurcina, John Erskine and Brashear. Also of note, Mike Green was a team-best plus-ten on Thursday and a team-worst minus-nine last night.

So what jumps out at you? Is Tyler Sloan ready for top-six minutes? For that matter, how would you rank the Caps' defensemen overall (and no, Fedorov doesn't count)?