A light week on the schedule was even lighter for most of the Caps, who basically showed up for the first of the six periods on the slate for the seven days. So let's take a look at the week what was in Corsi, but first, here's the year-to-date Corsi Rating for each skater on the team on a per game, per sixty minutes of even strength ice time rate (click to enlarge): 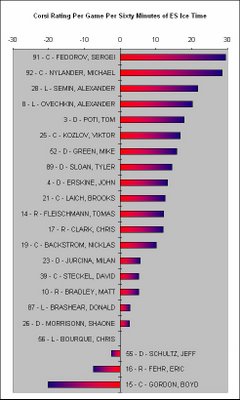 There's still no change at the top or bottom from last week, with Sergei Fedorov and Boyd Gordon at the extremes.

In terms of raw numbers, the Michael Nylander, Tomas Fleischmann, Chris Clark line was by far the team's best line at even strength, finishing third, second and fourth, respectively, on the team in Corsi for the week (Mike Green led the way at plus-17, and Tom Poti's plus-seven in one game was good for fifth, tied with Jeff Schultz).

On the flip side, Gordon continues to struggle, and Fedorov had his game of the season (in terms of Corsi) last night. Donald Brashear and Matt Bradley were the only other negative players for the week.

Bottom line time - having only three players (two regulars) who are in the red, so to speak, in Corsi Rating is obviously a good thing, but the fact that the Caps have slipped to 18th in the League in five-on-five goals for/against leads to one of two conclusions - either the offense isn't converting on their chances, or the goaltending and defense aren't getting it done. Given that the Caps are ninth in the League in even strength goals per game and in the middle of the pack in five-on-five shooting percentage, you'd probably lean towards the latter conclusion. Sure enough, Caps goalies have the second-worst five-on-five save percentage and have allowed the seventh-most even strength goals per game in the League. The goaltending and the defense have simply got to get better. Much better.