Alright, it's time for Silver Lining Monday*, which today features the penalty kill. The Caps PK got off to a rough start, allowing seven goals against in its first 24 times shorthanded (70.8% effective), but has gone 31-for-36 (86.1%) since to raise the efficiency to a nice, round 80% on the season, which is still not great (it would have ranked 26th in the League last season), but it's certainly a significant step in the right direction.

Unfortunately, as the PK has gotten better, the power play has gotten worse, as shown below: 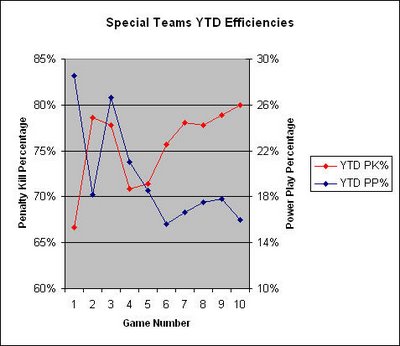 But as this is Silver Lining Monday, we're going to focus on the PK. What has been driving the improved kill efficiency? Well, statistically, it's hard to say - the amount of time shorthanded doesn't seem to be much of a factor, and neither do the total number of shots against or the per game average shots against per minute (I won't bore you with those charts, but note that since the PK started this turn around in Game 5, the Caps have had three games in which they've been shorthanded for more than 13 minutes - not good). But one major driver seems to be the goaltending (which likely includes the defense limiting quality chances against): 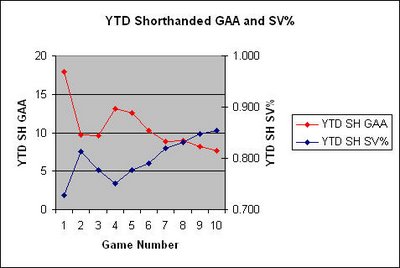 As you can see, GAA is down, SV% is up. Granted, both stats had plenty of room for improvement after that rocky start, but they have, indeed improved. In fact, heading into last night's game, the Caps were 17th in the League in four-on-five save percentage - plenty of room for improvement, to be sure, but far better than their rank in overall save percentage, a woeful 27th prior to last night (Colorado, Nashville and Dallas were worse).

Now, it may not seem like a great revelation to attribute a better PK to better goaltending, and indeed, it's no great epiphany. But given that the team isn't cutting down on the penalties it's taking and isn't limiting the shots against on the kill, it's good to know that the last line of defense is holding up its end of the bargain... shorthanded, at least.

* Just because it's Silver Lining Monday doesn't mean you can't piss and moan in the comments.

The way the "Semin disses Crosby" quote has been covered is beyond annoying on so many levels. First of all, the mainstream media's attribution of credit for the quote is shameful, but unsurprising (recall their coverage of the Ovechkin Hart t-shirt story). Secondly, I must have mis-read the quote, because I don't recall Semin saying he was better than Crosby, and yet I see comparison's between the career accomplishments of the two everywhere, as if the only people who can criticize a player are those who are more skilled than the subject of their criticism. Finally, how big a stiffy did Don Cherry get (sorry for the visual) when he saw that a Russian claimed that an American is better than a Canadian? If a Swede had agreed, Cherry would have spontaneously combusted.... The Bears rookie line of Oskar Osala and "two Frenchies" was pretty awesome in the third period yesterday (and for a couple more prospect notes, head over to TRS).