Breathe In, Breathe Out

Share All sharing options for: Breathe In, Breathe Out

Early this morning was, I believe, the first time this season that the temperature outside has been low enough that I've been able to see my breath upon a deep exhale. From time to time upon such an occurrence, I'm reminded of one of my all-time favorite hockey photos: 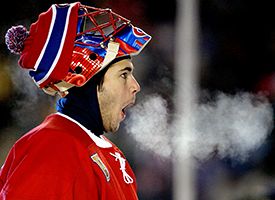 This year, of course, that photo has a little more meaning, considering that its subject is now "one of ours."

A lot has changed in the five years (from next Saturday, in fact) since that pic was snapped - outdoor games are still special, but no longer unique events; Jose Theodore has changed teams twice; the Caps have changed uniforms and an entire roster (with the exceptions of Alex Semin and Boyd Gordon) - and Theodore's fortunes have changed as well. Just take a gander at the numbers before and since that ridiculously cold Edmonton evening:
As his averages have gotten worse, his record has gotten better. Huh.

Anyway, it will be interesting to see if the five-year anniversary of The Heritage Classic receives much attention around the hockey world, perhaps with a couple of predictable and cliche interviews with players who were on the ice that day spread across the internet or a "where are they now?" segment on Hockey Night In Canada. One thing is for certain, however - Jose Theodore is not now where he was then, and until he gets back there, Caps fans will be waiting to exhale.