There was no TWIC last week, so this week we're looking at the entire fortnight past - seven games and a 3-4-0 record (and only ten players from the Opening Night roster were able to play in each of the seven games).  We'll take a look at the two weeks that were, but first, here's the year-to-date Corsi Rating for each skater on the team on a per game, per sixty minutes of even strength ice time rate (excluding players who have played less than a quarter of the games): 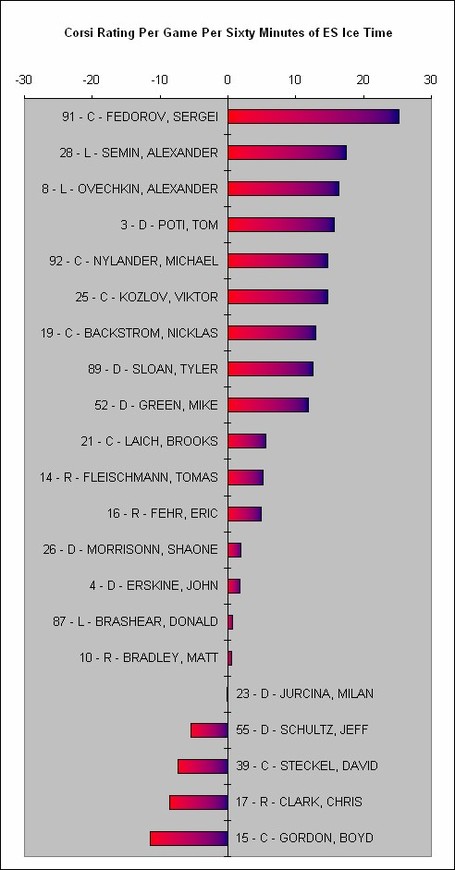 Comparing this week's chart to the that of two weeks ago, you'll notice that Eric Fehr has gone from the second-worst rating on the team to the top half of the team, having turned a big negative number into a decent positive. Donald Brashear has also gone from barely negative to barely positive (which is itself barely positive).

In terms of raw numbers, Alex Ovechkin led the way (plus-23 in seven games), followed by Fehr (plus-20 in six), Nicklas Backstrom (plus-19 in seven), Tyler Sloan (plus-15 in seven) and Viktor Kozlov (plus-14 in seven) rounding out the top five.

On the other side of the ledger, David Steckel had a minus-14 rating in seven games, while Boyd Gordon (minus-13 in six games), Matt Bradley (minus-11 in seven), Jeff Schultz (minus-10 in four) and Chris Clark (minus-eight in four before succumbing to injury) bring up the rear. Also of note, Bradley and Brooks Laich are the only Caps to have negative ratings in each of the last three games (Ovechkin, Backstrom and Sloan have each had positive ratings in the past three matches).