The Caps' power play has been red-hot of late, with goals in eight straight and a 34.4% efficiency over that span to jump up to seventh in the League overall.

But as good as the power play has been, the penalty kill has been nearly as bad, allowing at least one goal in six straight and nine of the last ten games, and has dropped to 25th in the League. 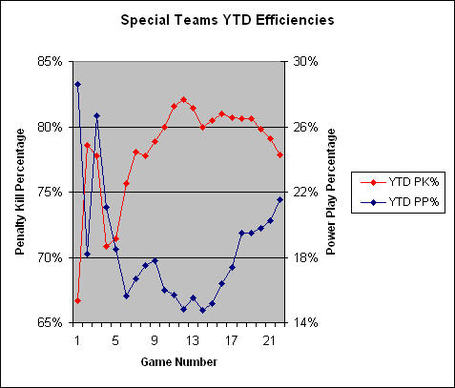 Of note, the power play's low-water mark and the penalty kill's high-water mark both came at the end of Game 12, which was also the last game that Sergei Fedorov played more than five minutes of. Coincidence? Perhaps.

Also of note, the penalty kill has been just 69% successful since Alex Semin's last game played. Coincidence? Probably not.

It's interesting that the Caps seem to be missing Semin and Fedorov on the penalty kill more than they're missing those two and Mike Green on the power play. Who would've thunk it?