You Know You Have A Huge Fundraising Advantage When...

Share All sharing options for: You Know You Have A Huge Fundraising Advantage When...

By opting out of public financing for the general election, Barack Obama has been able to raise - and spend - positively ridiculous sums of money. In fact, he's going to end up "breaking the advertising spending record set by President Bush in the general election four years ago, having unleashed an advertising campaign of a scale and complexity unrivaled in the television era."

Senator Obama is out-spending Republican Presidential nominee John McCain by at least a four-to-one margin, and raised more money in September than Senator McCain has been permitted to in the entire general election (Senator McCain was constrained by the limits that accompany accepting public financing).

And while the two candidates buy up air time on your television and radio, Senator Obama is going somewhere that his opponent isn't: your video games. Per the AP (via FirstCuts):

For those too busy playing video games to watch presidential ads on television, Barack Obama has a solution. He's become the first presidential candidate to buy ad space inside a game....

The Democrat's ads are aimed primarily at game players who like sports, including NASCAR, the NBA, the NHL and skateboarding. That means EA Sports' motto, "It's in the game," now applies to presidential politics as well.

The NHL? Yep (maybe they saw an opening after the Republican Vice Presidential nominee nearly got booed out of the Wachovia Center and took the hint from the sign-holders in the background of this shot). Here's an example: 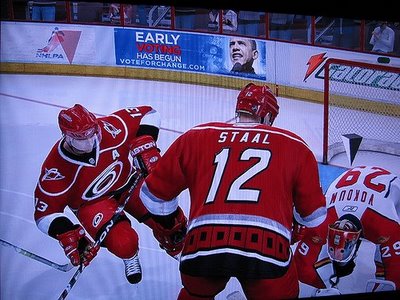 So what do you think - keep your politics out of my video games or cool and clever?