After a trio of one-goal games on a tough road trip in which the Caps were only able to salvage a pair of points in the standings, the regular season is now roughly 1/10th complete and things are starting to settle a bit statistically. Let's have a look at the week what was in Corsi. But first, here's the year-to-date Corsi Rating for each skater on the team on a per game, per sixty minutes of even strength ice time rate (click to enlarge): 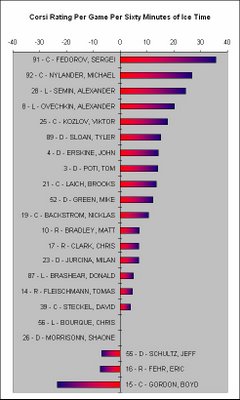 There's no change at the top or bottom from last week, as Sergei Fedorov and Boyd Gordon once again provide the bookends. Chris Clark and Tomas Fleischmann moved to the right side of zero, as neither had a game in the red, and Eric Fehr slipped from the black to the red thanks to one bad game (a minus-5 in Phoenix) and his small number of games played.

The big movers this week include Tyler Sloan, who saw the first action of his NHL career and was a team-best plus-13 last night (which hardly makes up for that bad clear in the 'Yotes game), Flash, Clark and Michael Nylander on the plus side, and Donald Brashear, Fehr, Fedorov and Nicklas Backstrom on the negative side. Some of these swings, on both sides, of course, can be attributed to unsustainably high or low early season numbers levelling out a bit (see Fedorov).

In terms of raw numbers, Nylander lead the team this week (at plus-24), and was on of four Caps to have a positive rating in each of the three games (Fedorov, Mike Green and Clark were the others; Fleischmann was positive in two games and even in one). Fleischmann, Clark, Green and Sloan round out the top five for the week. On the other side of the ledger, Gordon was minus-ten on the week, and Brashear, Backstrom, Fehr and David Steckel were all in the minus-five to minus-seven range.

In case you're wondering, Alex Ovechkin was plus-one for the week (2, -2, 1), which, for a guy who was averaging plus-eight per game coming into the week, is obviously not getting it done. Hopefully, getting Viktor Kozlov back will help.

How do these numbers mesh with what you've been seeing on the ice at even strength? Is the Fleischmann-Nylander-Clark line (by far the team's best in terms of Corsi Rating last night) a combo that you see sticking going forward? Is Shaone Morrisonn the most over-rated player on the team? Could Tyler Sloan be an NHL defenseman (at least in as much as Milan Jurcina or John Erskine are)? [My answers, for what it's worth, would be Yes, Maybe and No.] Does anything else jump out at you?