I didn't catch enough of last night's game to comment on it, so if you've got any observations you'd like to make, let 'em rip in the comments. Otherwise, we'll take a look at the week (and year-to-date, or YTD) in Corsi. First off, here's the YTD Corsi Rating for each skater on the team on a per game, per sixty minutes rate (click to enlarge): 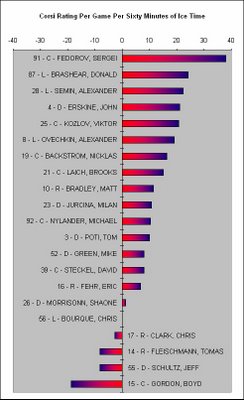 The big movers from last week include Shaone Morrisonn (who dropped from around +25 to just over +1) and Sergei Fedorov (who jumped from +20 to around +38) and Michael Nylander and Milan Jurcina (leaps from approximately -10 to +10).

In terms of raw numbers, Fedorov lead the team this week (at +51) and had the best Corsi Rating of any skater in each of the team's three games (Alex Semin, Alex Ovechkin, Nicklas Backstrom and Jurcina/Nylander round out the top five for the week). Morrisonn and Boyd Gordon (happy 25th birthday, by the way) were each -12 on the week, and Jeff Schultz (-4) was the only other Cap in the red for the period.

How do these numbers mesh with what you've been seeing on the ice at even strength? Do you buy John Erskine as being that productive or Flash as being that unproductive so far? Does anything else jump out at you?